Sports News | Devon Conway Has Proved, Will Be Hard for CSK to Leave Him out of Playing XI: NZ All-rounder Suzie Bates

Get latest articles and stories on Sports at LatestLY. New Zealand all-rounder Suzie Bates said on Saturday that it will be hard for Chennai Super Kings to leave opener Devon Conway out of their playing eleven after his recent good performances in late stages of the ongoing Indian Premier League 2022. 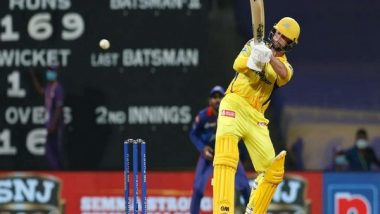 Dubai [UAE], May 13 (ANI): New Zealand all-rounder Suzie Bates said on Saturday that it will be hard for Chennai Super Kings to leave opener Devon Conway out of their playing eleven after his recent good performances in the late stages of the ongoing Indian Premier League 2022.

"Being from New Zealand, I think that all the New Zealanders in the squad should be playing (in IPL). It is a really tough competition to get opportunities until you do not prove yourself at that level. But now that he (Conway) has done that, it will be hard for them (CSK) to leave him out of their starting XI. He has proved himself in tests, ODIs and T20s in India, I am sure he will get plenty of opportunities. It is great to see NZ players perform at that level and I know they love playing the competition as well," said Bates in an exclusive interview with ANI.

This statement comes at a time when Conway has been performing well for the Super Kings in the final few league games of IPL. He had scored only three during his CSK debut against Kolkata Knight Riders on March 26. He did not get featured in the side's playing XI till the end of April. He had left the bio-bubble in late April due to his marriage.

However, after returning to the side on May 1, the stylish Kiwi southpaw smashed three consecutive half-centuries against Sunrisers Hyderabad (85*), Royal Challengers Bangalore (56) and Delhi Capitals (87). In his previous game against Mumbai Indians, he fell for a golden duck after being declared LBW. He could not get any assistance from DRS, which was not available during the first 10 balls of the match.

In five innings for CSK, the batter has scored 231 runs at an average of 57.75 with the best score of 87 and three well-made half-centuries.

Coming to his side, CSK has not had a great IPL, sitting at ninth position in the points tally with only eight points with four wins and only two games to go. The side will take on Gujarat Titans in their next game on May 15.

Conway, the South-African born batter, who has a promising future, is playing for New Zealand, has also delivered some excellent performances in his short career so far. The batter scored a double century on his debut against England at Lords and has scored two more centuries and three fifties in the longest format of the game. In seven tests, he has scored 767 runs at an average of 63.91. He has also represented Kiwis in three ODIs and 20 T20Is so far and averages fifty-plus in these two formats too. He also has an ODI hundred. In 2022, he was named as one of Wisden's Five Cricketers of the Year alongside Rohit Sharma, Jasprit Bumrah, Ollie Robinson and Dane Van Niekerk. (ANI)