Get latest articles and stories on Sports at LatestLY. Last year's semi-finalist and No.4 seed Maria Sakkari was sent packing by crafty Czech Karolina Muchova in the second round at the ongoing French Open 2022 on Wednesday. 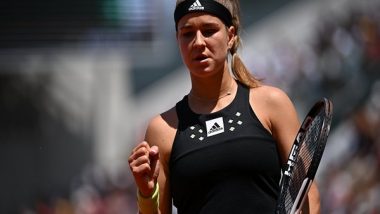 Paris [France], May 25 (ANI): Last year's semi-finalist and No.4 seed Maria Sakkari was sent packing by crafty Czech Karolina Muchova in the second round at the ongoing French Open 2022 on Wednesday.

Sakkari succumbed to 7-6(5), 7-6(4) defeat and Muchova is now through to the third round for second consecutive year in Paris. She next takes on American No.27 seed Amanda Anisimova.

Also Read | Who Qualifies in Case LSG vs RCB is Washed Out Due to Rain? Will There be a Super Over in IPL 2022 Eliminator if no Match Takes Place? Find Out Here!.

The US Open champion, making her tournament debut this week, was eliminated in a two-hour clash, with the 47th-ranked Sasnovich moving on to the third round, where she awaits Angelique Kerber, who won in straights against French wildcard Elsa Jacquemot.

Also Read | Narinder Batra Resigns As IOA President, Says ‘Will Not Run for a Further Term’.

Earlier, Canadian No.9 seed Felix Auger-Aliassime needed just two hours and 15 minutes to punch his ticket to the third round at Parisian clay for the first time, skipping past Argentinian qualifier Camilo Ugo Carabelli 6-0, 6-3, 6-4.

The 21-year-old Auger-Aliassime had never won a match on Paris' terre battue prior to this week. He next faces Serbia's Filip Krajinovic, who downed Croatian Borna Gojo, for a spot in the last 16.

Fritz acknowledged after his first-round win on Monday, a five-set victory over Argentine qualifier Santiago Rodriguez Taverna, that his Paris preparation had been hampered by a left foot injury. (ANI)