Russian tennis star Maria Sharapova was quick to congratulate and recognise her fellow compatriot Anastasia Pavlyuchenkova after the latter booked a spot in her maiden Slam final on Saturday. 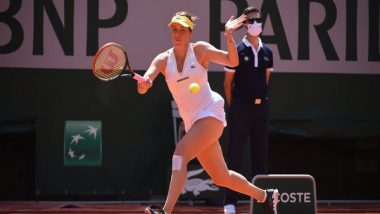 Paris [France], June 11 (ANI): Russian tennis star Maria Sharapova was quick to congratulate and recognise her fellow compatriot Anastasia Pavlyuchenkova after the latter booked a spot in her maiden Slam final on Saturday.

2012 and 2014 champion on Court Philippe-Chatrier, Maria Sharapova tweeted a screenshot of Pavlyuchenkova during the match from her TV screen and added some emoticons in the caption.

Anastasia's 7-5, 6-3 triumph over fellow first-time semi-finalist Tamara Zidansek on Thursday made her the first Russian to reach a major final since Sharapova lost to Serena Williams in the Australian Open decider more than six years ago.

Pavlyuchenkova is bidding to become only the fourth Russian woman to lift the Coupe Suzanne Lenglen after Sharapova, Anastasia Myskina (2004), and Svetlana Kuznetsova (2009).

That ultimate prize which is a Grand Slam title had lingered in the 29-year-old's thoughts at every one of her 52 campaigns.

"Like this something I've been thinking about every single time. I think as tennis players, that's the only goal I think we have in the head. That's why we playing tennis," she said in her post-match conference.

"That's for us the biggest achievement you can get. That's what you're playing for... I think about it all the time. Like been thinking about it since I was a junior, since I was a little kid, since I started playing tennis... It's been there in my head forever."

As a former junior world No.1 with 12 tour titles, 37 top-10 victories, and quarter-final appearances at all four majors, Anastasia now has every reason to believe that she has hit her Grand Slam ceiling.