Get latest articles and stories on Sports at LatestLY. Bengaluru (Karnataka)[India], May 14(ANI): A day before runners all across the city lace up their shoes to take to the streets of Bengaluru, the Indian elite athletes, contending for the title of World 10K 2022 champion, spoke to the media present about their outlook for the upcoming race and their plans for the future. 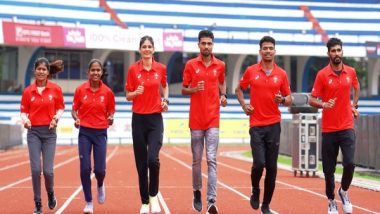 Bengaluru (Karnataka) [India], May 14 (ANI): A day before runners all across the city lace up their shoes to take to the streets of Bengaluru, the Indian elite athletes, contending for the title of World 10K 2022 champion, spoke to the media present about their outlook for the upcoming race and their plans for the future.

Heralding the women's field were Sanjivani Jadhav, the current event record holder at 33:38 set in 2018, Parul Chaudhary, who has secured qualification for the 2022 Asian Games in the 3000m steeplechase event, and Kavita Kumar, who will make her 10K debut on the streets of Bengaluru on Sunday.

All three runners are familiar with each other, having undergone training for the upcoming race as well as future events at the National Camp in Bengaluru. For Kavita, her experience in winning medals at the Senior Federation Cup in Kerala and setting her personal best in the same event in Patiala the following year will come in handy as she attempts to run against a talented field on Sunday.

Parul's approach to the race involves focusing on herself, "I don't consider any competition. There is no special training because we run 5K and 10K in practice every time." For Sanjivani, it will be a matter of replicating some of her earlier accolades in the Federation Cup and Mumbai Marathon.The men's field boasts of Army athletes who are all accomplished and shared a few laughs with each other when asked about being able to compete against each other. Srinu Bugatha looks to be the man to beat in the field, having won the Mumbai Marathon in 2020 and finishing 2nd in the Delhi Half Marathon in the same year. AB Baliappa will be hoping to improve on his 5th place finish back in 2018. He also comes into the race on Sunday with qualifications for the Asian Games and a bronze in the SAF Nations Marathon in Bangladesh earlier this year.

For both Srinu and Baliappa, the World 10K is one step in the journey towards training for marathons. "I [and Baliappa] am training at the Army Sports camp in Pune. A full marathon practice is going on," said Srinu about his targets for the future. "It's my second time at the World 10K so I want to do my best. The next big target is a marathon - [for that], speed is important."

Kartik Kumar, the final representative of the men's field at the press conference, was very relaxed when asked about his chances of beating the course record, with his personal best of 29:20 being almost 20 seconds faster than what was set by Suresh Kumar. "I came to Bangalore for training so I'm happy to race with these people as well."

The USD $210,000 World Athletics Elite Label Race will witness some of the world's finest distance runners on the roads of Bengaluru as well as thousands of mass participation competitors from across India.

In addition to the World 10K for elite runners, there is an Open 10K, the Majja Run (5km) the Senior Citizens' Race and the Champions with Disability Race (both 4.2km). (ANI)