Get latest articles and stories on Sports at LatestLY. Blistering half-centuries by Jonny Bairstow and Liam Livingstone steered Punjab Kings to a massive 209/9 against Royal Challengers Bangalore in their IPL 2022 match at Brabourne Stadium here on Friday. 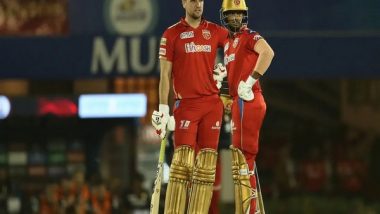 Mumbai (Maharashtra) [India], May 13 (ANI): Blistering half-centuries by Jonny Bairstow and Liam Livingstone steered Punjab Kings to a massive 209/9 against Royal Challengers Bangalore in their IPL 2022 match at Brabourne Stadium here on Friday.

Put to bat, Punjab Kings got off to a great start as their opening batters smashed 30 runs in just two overs without losing a wicket. Jonny Bairstow single-handily trashed Josh Hazlewood for 21 runs in the second over of the innings. The duo of Bairstow and Shikhar Dhawan smashed RCB's bowlers all over the ground.

The blistering duo took their team's total beyond the 50-run mark inside 4 overs and brought up their 50 runs partnership for the opening wicket as well. They kept thrashing the Bangalore bowlers and scored rapidly. Dhawan welcomed Glenn Maxwell's second over of the innings with a huge six over long-on.

Also Read | Zambia FA Calls Off Friendly With India Due to Non-Availability of Players.

Bangalore finally took a sigh of relief as Maxwell bowled Dhawan for 21 runs, leaving PBKS's score at 60/1. Dhawan's wicket led Bhanuka Rajapaksa to the crease and he continued the attack on RCB bowlers with Bairstow.

The sixth over of the innings delivered by Mohammed Siraj saw Bairstow smashing every ball to six or four runs. The loss of Dhawan's wicket seemed to make no impact on Punjab as Bairstow struck all around with ease and brought up his half-century.

In the seventh over, Wanindu Hasaranga dismissed fellow Sri Lankan Bhanuka Rajapaksa for one run.

Liam Livingstone then came to bat with the opener and kept up the momentum. Livingstone and Bairstow took their team's total beyond the 100-run mark in only the ninth over of the innings.

RCB took a big sigh of relief when Shahbaz Ahmed dismissed hard-hitting Bairstow when he had scored 66 runs.

PBKS skipper Mayank Agarwal then joined Livingstone on the crease. Wanindu Hasaranga delivered an amazing 3-run spell and dominated the PBKS duo in his over. Mayank departed after scoring 19 runs. After Mayank's wicket, PBKS struggled to stitch up a steady partnership as they lost Jitesh Sharma and Harpreet Brar cheaply. In the 19th over of the innings, Livingstone brought up his half-century in 34 balls.

In the 20th over, Harshal Patel struck twice as he dismissed Livingstone and Rishi Dhawan, conceding only four runs and Punjab's innings ended at 209/9. RCB now need 210 runs off 120 balls to win the match.