Get latest articles and stories on Sports at LatestLY. A blistering half-century by Hardik Pandya and quick 34 by David Miller steered Gujarat Titans to a challenging 168/5 against Royal Challengers Bangalore in their IPL 2022 match at Wankhede Stadium here on Thursday. 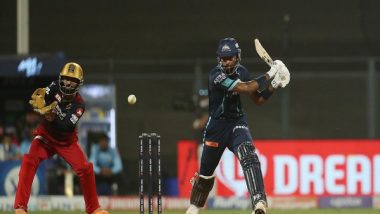 Mumbai (Maharashtra) [India], May 18 (ANI): A blistering half-century by Hardik Pandya and quick 34 by David Miller steered Gujarat Titans to a challenging 168/5 against Royal Challengers Bangalore in their IPL 2022 match at Wankhede Stadium here on Thursday.

Pandya smashed 62 runs off 47 balls while Miller played a brilliant quick knock of 34 runs off 25 balls. For RCB, Josh Hazlewood scalped two wickets while Wanindu Hasaranga settled for one.

Opting to bat first, Gujarat Titans got off to a great start as openers Wriddhiman Saha and Shubman Gill trashed Siddarth Kaul for 14 runs in the first over of the innings.

In the third over, Josh Hazlewood gave a big blow to GT as he dismissed star batter Shubman Gill when he had barely scored a run.

Glenn Maxwell gave another blow as he removed Matthew Wade with GT at 38. GT lost the third wicket at 62 as Wriddhiman Saha was sent to the pavilion.

David Miller then came to the crease and tried to anchor Gujarat's innings with skipper Hardik Pandya. Gujarat Titans were at 72/3 after ten overs as the Banglore bowlers kept a check on the flow of runs through tight bowling.

Miller and Pandya took their team's total beyond the 100-run mark in the 14th over as they trashed Maxwell for 18 runs. As they hammered RCB bowlers, Siddarth Kaul came up with a tight 16th over which conceded only four runs.

The partnership between Miller and Pandya took GT to 118-3 after the 15th over. RCB heaved a sigh of relief as Wanindu Hasaranga removed Miller after he had scored 34 leaving GT at 123/4.

Rahul Tewatia then joined GT skipper to post a respectable total against RCB in the last three overs. But Tewatia could not do much as he was sent back to the pavilion by Hazlewood after scoring two runs.

Rashid Khan came to bat with the skipper. In the 19th over of the innings, Pandya brought up his half-century which came of 42 balls. In the last over, the batters thrashed Hazlewood for 17 runs to take GT's total to 168/5 in 20 overs.