Get latest articles and stories on Sports at LatestLY. Cricketing legend Sachin Tendulkar expressed grief over the tragic demise of former Australia all-rounder Andrew Symonds, who died in a car accident on Saturday night. 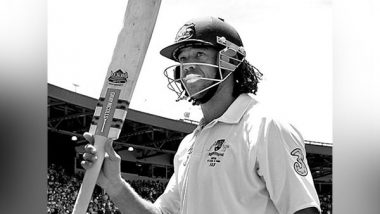 According to the police statement, Symonds, aged 46, died in a car accident on Hervey Range Road near the Alice River Bridge in Queensland, Australia when his car left the road and rolled.

"Andrew Symond's demise is shocking news for all of us to absorb. Not only was he a brilliant all-rounder, but also a live-wire on the field. I have fond memories of the time we spent together in Mumbai Indians. May his soul rest in peace, condolences to his family and friends," tweeted Sachin.

As per a Queensland police statement, Symonds was in a single-car crash at about 10:30 pm.

Following the information of the accident, paramedics arrived at the scene but could not revive the former Australian cricketer. Symonds was the only person in the car.

Symonds played 26 Tests for Australia and was an integral part of Australia's white-ball sides that dominated the world between 1999 and 2007. (ANI)