Sri Lanka have been fined 20 per cent of their match fees for maintaining a slow over-rate against India in the second ODI in Colombo on Tuesday. 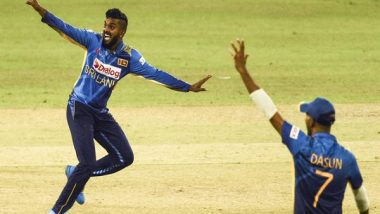 Dubai [UAE], July 22 (ANI): Sri Lanka have been fined 20 per cent of their match fees for maintaining a slow over-rate against India in the second ODI in Colombo on Tuesday.

Ranjan Madugalle of the ICC Elite Panel of Match Referees imposed the sanction after Dasun Shanaka's side was ruled to be one over short of the target after time allowances were taken into consideration, as per an ICC release.

In accordance with Article 2.22 of the ICC Code of Conduct for Players and Player Support Personnel, which relates to minimum over-rate offences, players are fined 20 per cent of their match fees for every over their side fails to bowl in the allotted time.

In addition, as per Article 16.12.2 of the ICC Men's Cricket World Cup Super League Playing Conditions, a side is penalised one point for each over short. Consequently, Sri Lanka will lose one point from their points tally during the Super League.

Shanaka pleaded guilty to the offence and accepted the proposed sanction, so there was no need for a formal hearing. On-field umpires Kumar Dharmasena and Lyndon Hannibal, third umpire Ruchira Palliyaguruge and fourth umpire Prageeth Rambukwella leveled the charge.

Meanwhile, having helped India snatch victory from the jaws of defeat in the second ODI against Sri Lanka, pacer Deepak Chahar has revealed how watching MS Dhoni finish games helped him plan his innings in Colombo on Tuesday.

"Watching MS Dhoni close out matches has been a big factor. I have watched him for a long period and I have always seen him finishing matches. When you talk to him, he always tells you to take the game deep. Everyone wants us to win, but when the match goes deep, it is thrilling for everyone involved," he said during a virtual press conference. (ANI)