Get latest articles and stories on Sports at LatestLY. Jasprit Bumrah creates world record of scoring most number of runs in an over hammering Stuart Broad who conceded 35 runs 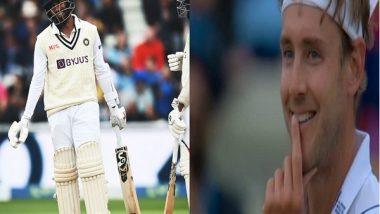 Birmingham [UK], July 2 (ANI): Stuart Broad is a legend with 550 Test wickets to his name and has proved to be a potential match-winner for England. In a career spanning almost seven years, the pacer has seen a lot of highs but has also seen a few lows. Among them is conceding six sixes in an over to Yuvraj Singh and now conceding 35 runs in an over, which is the most by any bowler in Test match cricket.

Coming in to bat at no.10 Jasprit Bumrah made light of a bowler of Stuart Broad's calibre hitting him for four boundaries and two sixes in an over while six runs came of extras at the Edgbaston Test in Birmingham. In the 84th over of the match Captain Bumrah started off by hitting a boundary, hooking him into the gap for four. Next, he bowled a wayward delivery to concede five wides.

Surprisingly Broad's next ball was a no-ball which went for a six. After that Bumrah wreaked havoc hitting him for three consecutive boundaries and in the process taking India's total beyond the 400-run mark.

In the second last ball of the over the Indian captain went on to hit another six followed by a single on the last ball. Bumrah hit Broad for 29 runs and six runs in the form of extras made it 35 runs of the over. With this, Broad has surpassed West Indies legend Brian Lara who hit South Africa's Robin Peterson for 28 in an over in 2003. Following Lara are former Australian captain George Bailey, who hit England pacer James Anderson for 28 runs in 2013 and South African spinner Keshav Maharaj also whacked England's Joe Root for 28 runs in 2020.

Almost 15 years back at the Kingsmead in Durban, Broad was at the receiving end when India's swashbuckling left-hander Yuvraj Singh went on to hit 6 sixes in an over to the English pacer. A feat which is only achieved by Herchelle Gibbs during 2007 ICC World Cup in West Indies against the Netherlands and former West Indies captain Kieron Pollard has achieved against Lakshan Sandakan of Sri Lanka in 2021.

Broad conceded most runs in an over in T20Is in 2007 during the T20 World Cup and now he has given away most runs in an over in Test matches. In 2007 it was Yuvraj Singh and in 2022 it is Jasprit Bumrah. With four boundaries and two sixes the Indian captain remained unbeaten on 31 off 16 balls at a strike rate of 193.75. India amassed 416 runs in first innings.

After a belligerent knock with the bat also excelled with the ball taking three wickets till Tea to leave England tottering at 60/3. (ANI)