USA Gymnastics on Monday announced that six-time Olympic medallist Simone Biles will participate in the balance beam final along with Suni Lee in the ongoing Tokyo Olympics. 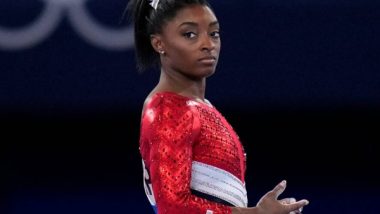 "We are so excited to confirm that you will see two U.S. athletes in the balance beam final tomorrow -- Suni Lee AND Simone Biles!! Can't wait to watch you both!" USA Gymnastics tweeted.

This will be the first final that 25-times World medallist, Simone, will take part in at the Tokyo Olympics. Alongside her will be Suni Lee, the 2020 Olympic all-around champion and uneven bars bronze medalist.

Earlier on Sunday, USA's apex gymnastic body announced that Biles will not participate in the floor final. "Simone has withdrawn from the event final for floor and will make a decision on beam later this week. Either way, we're all behind you, Simone," USA Gymnastics then tweeted.

Biles qualified for all four of the apparatus finals, scheduled for August 1 to 3. Earlier in Tokyo, she withdrew from the team competition after getting lost in midair and from the all-around final entirely to focus on her mental health. (ANI)