Grenada [St George' South Africa all-rounder Dwaine Pretorius has not traveled with the T20I squad for the West Indies series after he was tested positive for coronavirus. 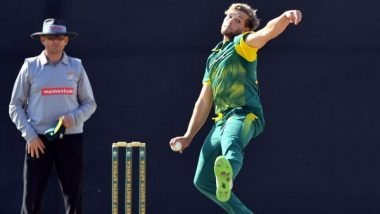 Grenada [St George's], June 24 (ANI): South Africa all-rounder Dwaine Pretorius has not traveled with the T20I squad for the West Indies series after he was tested positive for coronavirus.

Wiaan Mulder has replaced Pretorius in the squad for the T20I series against West Indies, which gets underway on Saturday.

Earlier this week, South Africa defeated West Indies by 158 runs with a day and session to spare. Keshav Maharaj took a hat-trick as Proteas seal a 2-0 series sweep.

On a magical day for the left-arm spinner, he closed with his seventh Test five-wicket haul as the visitors claimed their first Test series win away from home since 2017 against New Zealand.

The home side was bowled out for 165 in their chase of 324 to win. In a more stable start, they slipped from 90/2 before lunch to 107/6 after the first session thanks to Kagiso Rabada, who returned figures of 3/44 in his dismantling of the top order.

West Indies were fined 60 per cent of their match fee and penalised six ICC World Test Championship (WTC) points for maintaining a slow over-rate against South Africa in the second Test in St Lucia. (ANI)