Get latest articles and stories on Sports at LatestLY. New Zealand all-rounder Suzie Bates on Saturday said that a potential Women's edition of the Indian Premier League will add a lot of depth to the Indian women's cricket environment. 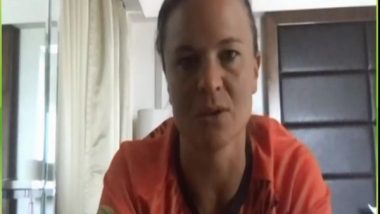 Dubai [UAE], May 14 (ANI): New Zealand all-rounder Suzie Bates on Saturday said that a potential Women's edition of the Indian Premier League will add a lot of depth to the Indian women's cricket environment.

"Many players across the world who have played international cricket would love to participate in a full IPL competition, I think a few players are waiting for this just because of the exposure that it might give to women's cricket," said Bates.

The idea of Women's IPL has been a topic of discussion among fans and players alike during the last few years, as cricketers like Ben Stokes, Harmanpreet Kaur, Suzie Bates, Punam Raut, Smriti Mandhana, Heather Knight among others have supported the concept.

In April this year, a BCCI source hinted at Women's IPL next year.

While a full-fledged Women's IPL has not yet translated into a reality, the Women's T20 Challenge was organised by the Board of Control for Cricket in India (BCCI) alongside the men's IPL. The first-ever such event took place on May 22, 2018, in form of a single match featuring two teams, IPL Trailblazers and IPL Supernovas. Both sides featured not only Indian stars, but star women players from Australia, England and New Zealand as well such as Suzie Bates, Alyssa Healy, Danielle Wyatt, Beth Mooney etc. Defeating the Supernovas by three wickets at Wankhede Stadium in Mumbai, IPL Trailblazers won the first challenge.

In 2019 and 2020 as well, Women's T20 Challenge was organised by BCCI alongside the men's IPL. In 2019, a third-team named IPL Velocity was added to the competition. The event like its previous edition, featured prominent worldwide women cricketers, this time also from Sri Lanka (Chamari Attapattu) and West Indies (Stafanie Taylor) and Bangladesh (Jahanara Alam). Supernovas won this competition by defeating IPL Velocity in the finals by four wickets at Sawai Mansingh Stadium in Jaipur.

IPL Trailblazers won the 2020 edition of the event by defeating IPL Supernovas in the finals by 16 runs at Sharjah. (ANI)