Get latest articles and stories on Sports at LatestLY. After a win over Velocity on Thursday Trailblazers skipper Smriti Mandhana heaped praise on Kiran Prabhu Navgire, who smashed a brilliant half-century against the Mandhana-led side in the Women's T20 Challenge. 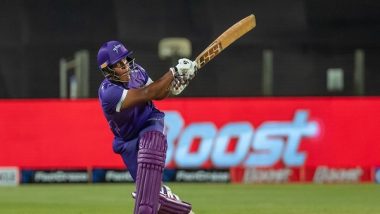 Pune (Maharashtra) [India], May 27 (ANI): After a win over Velocity on Thursday Trailblazers skipper Smriti Mandhana heaped praise on Kiran Prabhu Navgire, who smashed a brilliant half-century against the Mandhana-led side in the Women's T20 Challenge.

Brilliant knocks by Sabbhineni Meghana and Jemimah Rodrigues guided Trailblazers to a 16 run victory over Velocity in the Women's T20 Challenge. The Trailblazers, despite winning the encounter, couldn't keep Velocity under 158 and have thus been knocked out of the tournament on the basis of the NRR.

"We knew the scenario and we knew what we are gonna get, but really proud of the way the batters batted. We had a good chance, but Kiran Prabhu Navgire the way she batted... just took that final dream away from us. I think somewhere I was a little sad that she was hitting against us but a little happy as an Indian player that she is hitting hard and that far," said Mandhana in a post-match presentation.

The star of the match, Kiran Navgire's innings of 69 runs guided her team to cross the 158 mark and even after losing, made it to the final match. While praising Navgire, Mandhana said that she was surprised when the batter hit six on the very first ball of her innings. Navgire's 69 runs innings feature five sixes and five fours.

"It's a sight to watch but not as an opposite captain, great things to come for her going forward in the Indian set-up. The plan was to get their top-order out initially because we knew if Shafali stayed for long it will be really difficult and the ones we planned we got them all out but she (Kiran) came out of the box like we knew her abilities because she has done really well in domestic, but not many of us have seen her game, and to see her come out and hit the first ball for six and that too in the stands, I was a little surprised but that's how cricket goes," she added.

Talking about the upcoming tournaments for the Indian women's team Mandhana said, "We have a big year coming up for the Indian team, a lot of T20 cricket going forward. Go back, develop your skills, work on your fitness and come back strong that's the plan and win as many matches I can for India."

Coming to the match, Meghana scored 73 while Rodrigues smashed 66 runs to give their side a comfortable position in the first innings. For Velocity, Simran Bahadur scalped two wickets, and Kate Cross, Sneh Rana, and Ayabonga Khaka took one wicket each.

Trailblazers needed to restrict Velocity within 158 runs to enter the final but they failed as Velocity smashed 174/9 in 20 overs.

The final of the Women's T20 Challenge will be played between Velocity and Supernovas on Saturday at MCA Stadium in Pune. (ANI)