Get latest articles and stories on Tech at LatestLY. Latest leaks for the upcoming Google Pixel 7 Pro smartphone are painting a picture of mild upgrades compared to its predecessor, which is nearly a year old at this point. 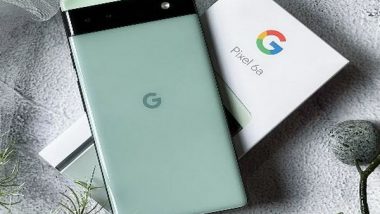 Washington [US], September 28 (ANI): Latest leaks for the upcoming Google Pixel 7 Pro smartphone are painting a picture of mild upgrades compared to its predecessor, which is nearly a year old at this point.

According to GSM Arena, among the changes, a switch to the Tensor G2 is expected; the new chip is allegedly bringing in GPU, NPU and modem improvements. Based on unconfirmed info from Yogesh Brar, the Pro model will be available in 12/128GB and 12/256GB configurations.

There is no word on a 12/512GB model like the current phones, maybe Google axed it based on sales data or maybe the rumoured info is incomplete.

Either way, the Pro phone is expected to have a similar 50MP main, 12MP ultra-wide and 48MP telephoto setup as its predecessor, though the tele camera will allegedly use a new sensor, a Samsung GM1 stepping in to replace the Sony IMX586.

The selfie camera will have a subtle change as well - resolution will remain at 11MP, though the new module is expected to have autofocus. The display will be the same as before, a 6.7" LTPO OLED panel with QHD+ resolution and 120Hz refresh rate. That will remain a major selling point over the FHD+ 90Hz display of the vanilla Pixel 7.

Its battery will basically be the same with a 5,000mAh capacity and support for 30W fast charging. Wireless charging will be supported on both Pixel 7 models.

As per GSM Arena, it seems that a lot is riding on the Tensor G2 chip as it is the only major upgrade and that too is debatable because some might point out that it has basically the same CPU as the G1. (ANI)