The Out-Law: Pierce Brosnan to Star in Netflix's Upcoming Action-Comedy; Tyler Spindel Roped In as the Director

Tyler Spindel, known for The Wrong Missy, is on board to direct the film. 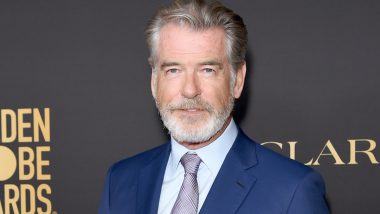 Former James Bond star Pierce Brosnan has joined Adam Devine in the cast of The Out-Law, an action-comedy set up at Netflix. Tyler Spindel, known for The Wrong Missy, is on board to direct the film. Devine will also produce with Happy Madison, a frequent collaborator of Spindel, reported Deadline. Resident Evil – Infinite Darkness Review: Netflix’s Anime Adaption of the Capcom VideoGame Is a Fun but Flawed Watch (LatestLY Exclusive).

The story of the film revolves around Owen Browning (Devine) is a simple bank manager about to marry the love of his life, Parker. When his bank is held up by the infamous Ghost Bandits during his wedding week, he believes his future in-laws who just arrived in town, are the infamous Out-Laws. Rebel Moon: Know More About Zack Snyder’s Star Wars-Inspired Sci-Fi Epic Coming Up on Netflix.

Evan Turner and Ben Zazove penned the script. Isaac Horne will executive produce the project. Brosnan will next be seen in Cinderella, starring Camila Cabello, and finished his work on Black Adam, fronted by Dwayne Johnson.