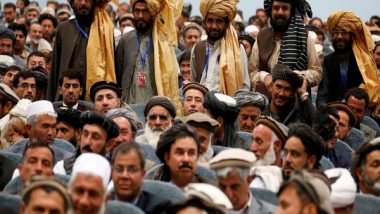 Around 3,500 religious scholars and elders from across the country have been invited to attend the three-day jirga, however, women have not been allowed to attend the assembly by the Taliban.

"The Jirga allows people of Afghanistan and even representatives of Iran and Pakistan-based Afghan refugees to attend it," Xinhua quoted Mujahid, as saying.

Some 70 personalities representing Afghan refugees in Pakistan and about 30 others from refugees living in Iran have participated in the Jirga, he added.

The participants of the jirga are expected to discuss a series of issues, including reopening schools for girls from grade 7th to grade 12th, the type of government, national flag and national anthem.

"One of the demands is that the decisions should be taken for the creation of an inclusive government that represents different ethnic groups," said Sayed Javad Hosseini, a political analyst.

In another statement, Bibi Amri, a university instructor said that the male and female clerics have the vital role to announce awareness of women's rights through mosques so women can be provided with their rights and called women's inclusion in the Loya Jirga "important." The gathering will be meaningless if women were not included, he added.

One of the major demands of the international community is the formation of an inclusive government. Moreover, the recognition of the current Afghan government is linked to upholding human rights and women's rights in the country.

There will be no television coverage of the event, only radio, local media reported. (ANI)