The war of words between senior officials of Pakistan and Afghanistan continued on Thursday as Pakistan's National Security Advisor Moeed Yusuf claimed that Kabul was being embarrassed by "idiotic statements" from its senior officials who were vitiating bilateral relations. 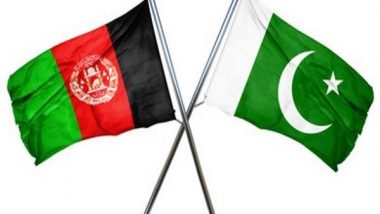 Islamabad [Pakistan], July 22 (ANI): The war of words between senior officials of Pakistan and Afghanistan continued on Thursday as Pakistan's National Security Advisor Moeed Yusuf claimed that Kabul was being embarrassed by "idiotic statements" from its senior officials who were vitiating bilateral relations.

This comes as Afghan President Ashraf Ghani recently ripped into Pakistan for abetting the Taliban, which in recent months has escalated attacks on forces and civilians.

Ghani said 10,000 'jihadi' fighters have entered Afghanistan in the last month, while the Imran Khan-led Pakistan government had failed to convince the Taliban to "negotiate seriously" in the ongoing peace talks.

Ashraf Ghani is not the one in Afghanistan accusing Pakistan of not doing enough as Afghan forces are struggling to thwart the Taliban offensive.

In a series of tweets, the Pakistan NSA said it was unfortunate for Afghans that senior officials -- acting as spoilers -- were trying to "vitiate bilateral relations" between Pakistan and Afghanistan through "vitriolic and delusional statements" to avert "attention from their own failures", Dawn reported.

"Afghanistan is being embarrassed daily due to these idiotic statements. Afghans should rest assured that everyone can see through the nefarious agenda of these spoilers," he said.

"We will not let a handful of venomous minds affect Pakistan's support to all Afghans for peace and stability," said Yusuf.

Islamabad and Kabul relations are at a low ebb in the wake of escalating violence in Afghanistan.

Last week, Prime Minister Imran Khan had hit back at President Ghani's claims about Pakistan's "negative role" in the Afghan peace process, adding that it was "unfair" to blame the country for the situation in Afghanistan.

"We have made every effort, short of taking military action against the Taliban in Pakistan, to get them on the dialogue table and to have a peaceful settlement [in Afghanistan]."

That same day on Friday, the Foreign Office had denied allegations by Afghan Vice President Amrullah Saleh that the Pakistan Air Force (PAF) had issued an official warning to Afghan security forces to repel any action by the latter to dislodge the Taliban from the border crossing of Spin Boldak.

The Afghan vice president had also claimed that PAF was providing air support to the Taliban.

Such allegations "undermine Pakistan's sincere efforts to play its part in an Afghan-owned and Afghan-led solution" for restoring peace in Afghanistan, the FO had said in its response, stressing that "at this critical juncture, all energies are focused on achieving an inclusive, broad-based and comprehensive political settlement in Afghanistan".

The tensions escalated after the July 16 kidnapping of Afghanistan's envoy to Pakistan Najib Alikhail's daughter Silsila Alikhail who was released after 6 hours from the capital city of Islamabad. Kabul hits back by recalling its top envoy and diplomats from Islamabad.

Pakistan, on the other hand, is issuing confusing statements. Though it has pledged to bring perpetrators to justice, its interior minister Sheikh Ahmed Rasheed has claimed that no kidnapping took place. Rasheed remarks drew sharp criticism from the Afghan government.

Reacting sharply to Rasheed's remarks, the Afghan Foreign Ministry said it expects unprofessional prejudgements to be avoided before the investigation comes to an end.

"While the investigation process has not been concluded and the perpetrators have not been arrested, the continuation of unilateral statements and unprofessional prejudgments will call the transparency of the investigation into question and result in increased mistrust," the ministry said. (ANI)