New Zealand, which is usually outspoken on human rights matters in general has remained largely silent on the China's concentration camps thinly veiled as "re-education camps" for the Uyghur Muslims. 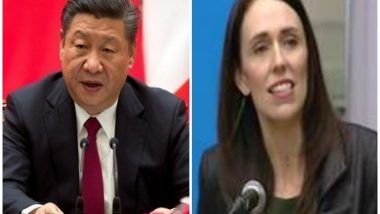 It is pertinent to note that China is New Zealand's largest partner, making up around 30 per cent of New Zealand's overall trade equating to about USD 10.8 billion.

Wellington's second largest partner, far behind China, is Australia with cross-Tasman trade making up about 12.7 per cent, or about USD 4.8 billion of New Zealand's total trade, reported East Asia Gazette.

Most of New Zealand's exports to China come in the form of dairy products, and it appears New Zealand is afraid of what happened to Australia after Canberra stood up to Beijing over the treatment of the Uyghurs; in an act of punishment China cut down on Australian wine imports by a staggering 96 per cent.

China has already - clearly - decided to make enemies of most nations that they say or do anything that China doesn't like, and the Communist Party in Beijing have long been leveraging favourable economic ties with countries around the world to stop them asking critical questions about China's slide into fascism under President Xi Jinping, reported East Asia Gazette.

However, New Zealand is starting to show signs of a national backbone emerging.

After China's treatment of Australia, Kiwi Prime Minister Jacinda Ardern was quoted saying that the differences in their values were getting harder to reconcile.

Perhaps Prime Minister Ardern could not be more direct about her stance at present for fear of economic repercussions. Perhaps her approach to Beijing is simply 'pakaru' (terrified) to use a Kiwi term, reported East Asia Gazette.

COVID-free travel between New Zealand and Australia has only just started after both nations closed their respective borders to the rest of the world for much of the past 15 months, and it seems at present that New Zealand was looking to appease its long-time partner Australia ahead of Prime Minister Morrison's visit to New Zealand late in May.

This appears to be the case with New Zealand also trying to moderate between Australia and China to help facilitate better relations between the two.

For now, this appears the only way New Zealand can maintain its trade relations with China while also supporting its neighbour Australia, reported East Asia Gazette.

China's ever-growing influence and how to counter it in the halls of power on both sides of the Tasman Sea is expected to be a long-standing focal point for Australia and New Zealand to hammer out though.

While it is not necessary for New Zealand to harshly criticize Beijing on the world stage it is certainly surprising that they decided to stay silent at a critical time in regional history, especially as China continues to suppress dissent in Hong Kong, and continues to coerce Taiwan to give in to its demands that the island nation is an integral part of China - even though both have completely separate political and legal systems.

All the while, more and more news is coming out of China about forced sterilizations of Uyghur women, and slave labour forced on Uyghurs by Chinese authorities in the form of cotton picking, as well as attempts to force the Uyghurs to disavow Islam by making them eat pork. (ANI)