World News | Ahead of UN Visit, Beijing Warns Uyghurs Not to Talk About 're-education'

Get latest articles and stories on World at LatestLY. Ahead of the UN team's much-anticipated visit to Xinjiang, the Chinese government has issued a new directive that forbids Uyghurs from discussing the network of internment camps. 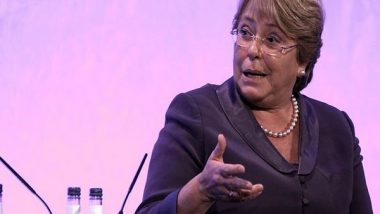 Beijing [China], May 13 (ANI): Ahead of the UN team's much-anticipated visit to Xinjiang, the Chinese government has issued a new directive that forbids Uyghurs from discussing the network of internment camps.

A police officer in the region told RFA that police received special government notices on how to prepare for the visit this month by Michelle Bachelet, the UN's high commissioner for human rights.

The policeman, who is a Chinese Communist Party member, said that he was playing a leading role in disseminating the notices during political study sessions and enforcing their mandates.

"The political study sessions are being held on Wednesdays, and prefectural and autonomous regional notices are being studied as they arrive," he said.

China on Wednesday welcomed the upcoming visit of the UN rights chief Michelle Bachelet to the Xinjiang province this month amid reports of human rights abuses in the northwest region.

"The preparatory team of the Office of the High Commissioner for Human Rights has arrived in China and is currently undergoing quarantine in accordance with relevant anti-COVID-19 protocols," China's foreign ministry spokesperson Zhao Lijian told a daily press briefing.

"The preparatory team has begun work and the two sides are discussing the specific arrangements for the visit," he said.

Several rights groups have said the planned visit to China by the UN high commissioner for human rights should meet minimum standards to be considered credible.

Dozens of rights groups say the Chinese government has committed widespread and systematic policies of mass detention, torture, cultural persecution, and other offenses against Uyghurs and members of other Turkic groups in Xinjiang that amount to crimes against humanity. (ANI)