Amidst the worldwide disapproval of the Taliban's reign in Afghanistan, the probable ban on opium cultivation by them will have adverse effects on the Afghan economy, as per reports issued by Afghanistan Analysts Network (AAN). 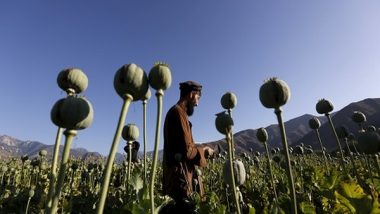 Kabul, April 15: Amidst the worldwide disapproval of the Taliban's reign in Afghanistan, the probable ban on opium cultivation by them will have adverse effects on the Afghan economy, as per reports issued by Afghanistan Analysts Network (AAN).

If the Taliban decides on banning poppy cultivation, it would cause a "grievous blow to the economy", AAN stated. Afghanistan is already reeling under immense economic pressure for losing almost every foreign income, both civilian and military, post-Taliban's rise to power, Tolo News reported. Madhya Pradesh Police Nabs 5.6 Kg Opium Worth Rs 2 Crore in Chocolate Wrappers.

The opium industry is the primary financial support Afghanistan has entitled in stabilizing the local currency. The United Nations Office on Drugs and Crime (UNODC) reported that in 2020 Afghanistan exported about 80 per cent of its opium production worldwide. Opium, heroin, and morphine production is responsible for "Afghanistan's largest illicit economy activity," UNODC said.

Banning poppy production will hence account for major consequences all over the world. "Although the Taliban have not announced a ban on the cultivation and trade of poppy so far, the people know that they won't forbid it, at least not this year," a farmer from Kandahar was reported saying.

Earlier, Taliban imposed a similar ban on opium cultivation in 2000, and the AAN report tries to find similarities between the two decisions. Just like in 2000, Afghanistan faced issues pertaining to drought, resistance to Taliban rule, and sanctions, similarly this year issues on women and human rights, and opposition of organizations like al-Qaeda are persistent.

"The Taliban's 2000 ban on opium was made in an edict by then-leader Mullah Muhammad Omar on 27 July 2000. According to David Mansfield, it was the Taliban's sixth attempt at banning opium. At the time, then head of UNODC research unit Sandeep Chawla praised the ban as "one of the most remarkable successes ever," but later clarified that "in drug control terms it was an unprecedented success, but in humanitarian terms a major disaster," the report said.

Taliban has also made it difficult for drug users in Afghanistan to find drugs. "I can't buy any drugs. The Taliban treat us badly. They don't let us sleep anywhere. They burn our tents and beat us," cited a drug user, mentioned in the report.