Breaking with the party line in a rare show of opposition to his country's war in Ukraine, a Communist Party legislative deputy in Russia's Far East demanded an end to the military operation and withdrawal of Russian forces. 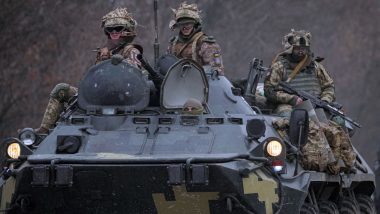 Moscow, May 28: Breaking with the party line in a rare show of opposition to his country's war in Ukraine, a Communist Party legislative deputy in Russia's Far East demanded an end to the military operation and withdrawal of Russian forces.

“We understand that if our country doesn't stop the military operation, we'll have more orphans in our country,” Leonid Vasyukevich said at a meeting of the Primorsk regional Legislative Assembly in the Pacific port of Vladivostok on Friday. Vladimir Putin Says, ‘Countries Attempting To Isolate Russia Only Hurt Themselves’.

His comments, which he addressed to President Vladimir Putin, were shown in a video posted on a Telegram channel emanating from the region. Another deputy followed to support Vasyukevich's views but the legislative assembly's chairman issued a statement afterward calling the remarks a “political provocation” not supported by the majority of lawmakers.

Earlier this month, a Russian diplomat based in Geneva resigned, saying he was “ashamed” of the war. Russia has imposed severe penalties for publicly challenging the Kremlin's narrative on the military operation in Ukraine.

Kyiv: Ukrainian President Volodymyr Zelesnkyy spoke defiantly Friday in two speeches about his country's ultimate victory over Russian forces in both the most pressing battle in eastern Ukraine and the war, generally.

“Ukraine is a country that has destroyed the myth about the extraordinary power of the Russian army -- an army that supposedly, in a few days, could conquer anyone it wants,” he told Stanford University students by video.

“Now Russia is trying to occupy the entire state but we feel strong enough to think about the future of Ukraine, which will be open to the world.” Later, in his nightly video address, Zelenskyy reacted to Russians' capture of the eastern city of Lyman, the Donetsk region's large railway hub north of two more key cities still under Ukrainian control, and its attempt to encircle and seize the city of Sievierodonetsk, one of the last areas under Ukrainian control in Luhansk.

“If the occupiers think that Lyman or Sievierodonetsk will be theirs, they are wrong,” the Ukrainian president said in his nightly video address. “Donbas will be Ukrainian.”

Kyiv: The governor of the Luhansk region is denying Russian claims that their forces have surrounded the eastern city of Sievierodonetsk but said Ukrainian soldiers may have to retreat. Serhiy Haidai wrote on Telegram Friday that the Russians have seized a hotel and bus station.

“The Russians will not be able to capture Luhansk region in the coming days, as analysts predict. We will have enough forces and means to defend ourselves,” Haidai wrote.

He added that it's possible that “not to be surrounded, we will have to leave.” A critical supply and evacuation path, the Lysychansk-Bakhmut highway, is constantly under fire, but supplies and people are still passing on it, Haidai said.