Iranians have begun voting in presidential elections amid concerns of low voter turnout with the conservative head of the judiciary, Ebrahim Raisi, widely seen as the frontrunner. 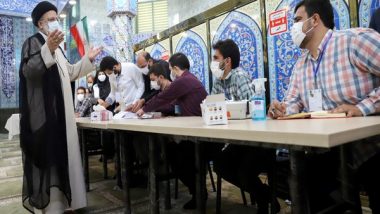 Tehran [Iran], June 18 (ANI): Iranians have begun voting in presidential elections amid concerns of low voter turnout with the conservative head of the judiciary, Ebrahim Raisi, widely seen as the frontrunner.

Nearly 60 million eligible voters in Iran will decide the fate of four candidates in the fray to succeed President Hassan Rouhani, Al Jazeera reported. Rouhani cannot contest the elections as he is term-limited from seeking office again.

The Guardian Council, a 12-member constitutional vetting body, under Supreme Leader Ali Hosseini Khamenei barred hundreds of candidates, including reformists and those aligned with Rouhani.

Polls opened at 7 am local time and will close at midnight but can be extended for two hours. The results are expected about midday on Saturday.

"Each vote counts ... come and vote and choose your president ... this is important for the future of your country," said Khamenei after casting his vote in the capital, Tehran.

Al Jazeera reported that there is a lot of support behind Raisi, who is currently the head of the country's judiciary.

If elected, Raisi would be the first serving Iranian president sanctioned by the US government even before entering office over his involvement in the mass execution of political prisoners in 1988.

Former Central Bank chief, Abdolnaser Hemmati, is running as the race's moderate candidate but has not inspired the same support as outgoing President Hassan Rouhani.