World News | Is the New World Order in Making?

Get latest articles and stories on World at LatestLY. "The western alliance's won the cold war. The Soviet Union collapsed. They got what they wanted. They were able to institute this world order and now it does not work," said Professor William Hurst, Chong Hua Professor of Chinese Development and Deputy Director at the Centre for Geopolitics, Cambridge University. 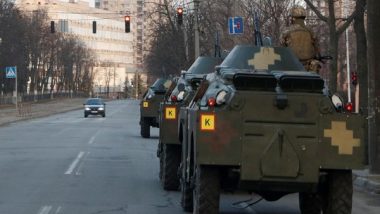 London [UK], May 13 (ANI): "The western alliance's won the cold war. The Soviet Union collapsed. They got what they wanted. They were able to institute this world order and now it does not work," said Professor William Hurst, Chong Hua Professor of Chinese Development and Deputy Director at the Centre for Geopolitics, Cambridge University.

Professor Hurst was speaking at a webinar hosted by an independent think tank, The Open Forum on the 12th of May in London.

The event was moderated by global affairs analyst, Michael Bociurkiw a senior fellow at Washington DC-based Atlantic Council, who joined straight from Lviv in Ukraine, the epicentre of this debate thus providing the topic its current context. Bociurkiw has been reporting from Ukraine for a while.

In the post-world-war II world," the "western block," or the "democratic camp," also referred to as, "rules-based international order," strived to promote the three D's: democracy, deregulation and deterrence," by way of institutions and alliances like the UN, NATO and so on.

Making his point further Professor Hurst said, "Since September 2011 - it's becoming clearer and clearer that none of these three D's is really working."

Professor Hurst sees three visions emerging: one, that of "chaos," with no dominant player; second, "bipolar," where the world is coalescing into-Democracy and non-democracy, possibly leading to cold war 2.0 and the third, where "multi-polarity becomes the stable outcome, leading to power balance and stable equilibrium."

Of these several possibilities in the present fragmented international system where the US does not find itself responsible for "maintaining a regional security order," Dr Rahul Mishra, Senior lecturer, Asia-Europe Institute, University of Malaya, Malaysia, went somewhat with the third scenario.

"Rising powers like India, Australia, Indonesia- these powers have taken the new responsibility to make sure that the status quo remains despite a fragmented international system," Dr Mishra said.

He disagreed that the world might be faced with the possibility of a new cold war 2.0 era.

Explaining his point Dr Mishra said, "No matter how hard the West tried the Russia-Ukraine conflict has not been seen by the majority of countries in South-Asia, South-East-Asia and the Indian ocean- Majority of small and middle powers have seen it as a conflict between Russia and Europe; Russia and Ukraine and indirectly between Russia and the US but not a conflict between democracies and non-democracies- NO. Cold war 2.0 is difficult."

The role of China is a crucial one in this mix of countries. How would Indo-China run to the super-power pan out is an ongoing debate in the academic circles. Only time will reveal how this plays out. Bociurkiw though was quick to point out the increasing Chinese influence in Ukraine where some hotels have signs in English, Ukrainian and Chinese.

Recalling a recent "Chinese brand of diplomacy," Bociurkiw said, "A few months ago Ukraine put its name on UN petition calling for better treatment of Muslim minority in China. China noticed, and they went back to Kyiv and said that if they do not remove the name-the shipment that 'we' have come of Covid vaccine...will not arrive."

Dr Yuka Kobayashi, assistant professor in China and International Politics at SOAS, University of London turned the table and pointed out to the forum that, "perhaps we have not learnt much from history."

Adding to her point she said, "it is actually coming back to full circle in terms of the complex issue between International law and international relations- is might, right? What we are seeing unfold in Ukraine is this really devastating thing. We learnt back in world-war II that actually we had to avoid, yet we set up the UN and we are quiet in the same problems and issue arise again."

As the conflict in Ukraine deepens the debate around 'the future world' deepens too. While the jury is still out on," the world order" it is quite clear that the present order is due for a shake-up. (ANI)