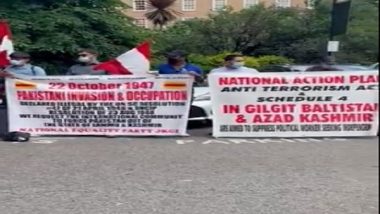 He also said that Pakistani High Commission (PHC) called their agents to disrupt the peaceful protest and the protesters were also threatened, harassed and verbally abused.

"Pakistani High Commission staff tried to disrupt our PROTEST in London today. But National Equality Party workers tackled them head on and confronted them rather than letting them continue their disruptive plan. PHC staff can be seen in the video saying I am a Pakistani servant," he said.