People in Pakistan occupied Gilgit Baltistan recently took to the streets against Islamabad's misrule, which they said has only worsened since the party of Pakistan's Prime Minister Imran Khan got legislative control of the region. 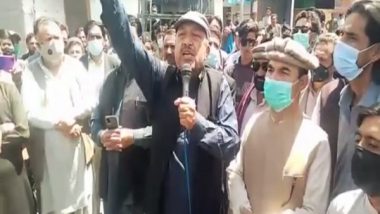 Ghizar [Gilgit Baltistan], May 12 (ANI): People in Pakistan occupied Gilgit Baltistan recently took to the streets against Islamabad's misrule, which they said has only worsened since the party of Pakistan's Prime Minister Imran Khan got legislative control of the region.

They accused Imran Khan and his party of discriminating against the people of Gilgit Baltistan by not providing them with the special packages they needed and were promised.

Shafqat Ali Inqilabi, a political leader said, "We want to give this message to Imran Khan and Khalid Khursheed that this atrocious discrimination must be stopped. We want answers to the lies you promised. This is a symbolic protest".

Nawaz Khan Naji, a member of the Gilgit Baltistan Assembly said, "I believe that every single boy and girl of the region, who are seen as people interested only in music will become live bombs and we will make them. We will make them."

While Islamabad is accused of carrying out indiscriminate exploitation in the past seven decades, the situation has further deteriorated since China's economic interests aligned with the Pakistani agenda.

And now Pakistan has been arbitrarily executing economically and politically destructive ideas for people of Gilgit Baltistan at the behest of Beijing.

The leaders said they were not launching their planned widespread campaigns immediately owing to a surge in Covid infections but will hit harder as soon as the situation normalizes.

Nawaz Khan Naji said, "As soon as the situation improves, we will launch an organised campaign and will go to each village and district to educate people about the issue and will inflict a complete shutdown."

Gilgit Baltistan has been under the illegal control of Pakistan for over seven decades and people of the region have been increasingly demanding freedom. However, so far they have made no gains with their voices being suppressed violently by the Pakistani state.(ANI)