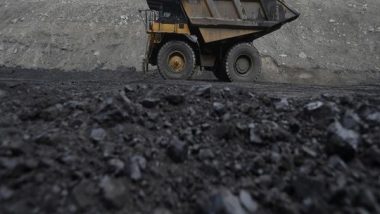 As per Shehbaz Sharif, Pakistan would save more than two billion dollars by importing coal from Taliban-led Afghanistan. According to a news statement from the Prime Minister's office, Pakistan, importing high-quality coal from Afghanistan will not only produce cheap electricity but also enable the nation to conserve vital foreign currency, which is under heavy financial crisis, reported local media. Taliban Separates Weekday Classes For Male, Female Students of Kabul University and Polytechnic University.

Shehbaz Sharif approved the import of super-critical quality coal from Afghanistan in Pakistani rupee instead of dollars to help generate low-cost electricity in the country. He also gave orders to the relevant authorities, according to the statement, to create an efficient system in this regard.

According to the Taliban, the purpose of increasing the price of coal is to increase the amount of tax and generate revenue for the country which is already in economic turmoil due to the drying of international assistance.

It is noteworthy government collects 30 per cent of customs duty on coal exports. Moreover, after various sanctions imposed by the global community, the Taliban is now banking on its natural resources to survive.

The Taliban are stepping up coal exports to Pakistan and have raised duties on sales, officials said, as the group aims to generate more revenue from its mining sector in the absence of direct foreign funding.

The move comes with global coal prices near record highs after top exporter Indonesia imposed a shock ban on exports earlier in 2022 and then the Russia-Ukraine war, pushing prices up further. However, the Taliban government does not have a coal export agreement with Pakistan.

According to a spokesman for the Afghan Ministry of Petroleum, Mufti Ismatullah Burhan, who talked to The Independent Urdu, said, "At the government level or with any other party, we have not entered into such an agreement with Pakistan or any Pakistani entity."

"We do not expect any gain from Pakistan because we are aware of the taste of the dollar and the euro and the poor condition of the Pakistani currency," added Ismatullah.

He said that although the price of coal had increased by 30 per cent for local dealers roughly four years prior, the price had remained constant for local traders, and the tariff would only apply to coal exported out of the nation.

Ismatullah further stated, "By now, Pakistan must have anticipated our response and that of the Afghan people, therefore, we have raised the levy on coal from 200 dollars per tonne."

The Taliban announced their first annual budget earlier last month, saying they would depend solely on local revenue - a big task for a country dependent on foreign assistance for the last two decades.