A US senator on Thursday slammed top American companies including Amazon, Nike and Apple for using forced labour from China, accusing them of making Americans complicit in Beijing crimes against Uyghurs. 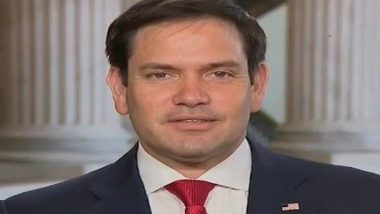 Washington [US], June 11 (ANI): A US senator on Thursday slammed top American companies including Amazon, Nike and Apple for using forced labour from China, accusing them of making Americans complicit in Beijing crimes against Uyghurs.

Speaking at a Senate Foreign Relations Committee hearing on China's crackdown on Uyghurs and other Muslim minorities in its western Xinjiang region, Republican Senator Marco Rubio said: "For far too long companies like Nike and Apple and Amazon and Coca-Cola were using forced labour."

"They were benefiting from forced labour or sourcing from suppliers that were suspected of using forced labour," Rubio said. "These companies, sadly, were making all of us complicit in these crimes. That is why it is critical to Senate quickly passed our Uyghur forced labour prevention act to ensure that the goods made by forced labour or Uyghurs forced labour to enter our markets and make all American unwilling accomplice," he added.

Recently, several companies including H&M and Nike said that they were concerned about allegations that forced labour has been used to produce cotton in Xinjiang.

According to a report by the Centre for Strategic and International Studies, China produces 22 per cent of the world's cotton, out of which 84 per cent comes from the Xinjiang region where over two million Uyghurs have been kept in mass detention camps.

Early this year, the United States become the first country in the world to declare the Chinese actions in Xinjiang as "genocide". In February, both the Canadian and Dutch parliaments adopted motions recognising the Uyghur crisis as genocide. The latter became the first parliament in Europe to do so.