Canadian Man Falls Asleep Behind the Wheel of His Tesla Car As Vehicle Breaks Speed Limit of 140kmph, Gets Booked Under ‘Dangerous Driving Charge’ 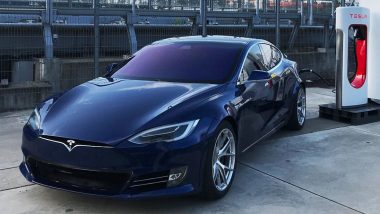 With the introduction of self-reliant car, Tesla had a significant impact on the rest of the industry. When Tesla first released autopilot in October 2015, CEO Elon Musk cautioned drivers to be ‘quite careful.’ He acknowledged that ‘some people’ may take their hands off the wheel, regardless, adding, ‘we do not advise that.’ The company still ask the motorists to pay attention and keep their hands on the wheel. But at times, drivers seem to overlook the warning. To highlight a recent case, a Canadian man was reportedly found asleep behind the wheel of his Tesla car, and the self-reliant vehicle broke its speed limit. The Tesla car on autopilot was going over 140kmph. The unidentified man was booked under ‘dangerous driving charge.’ Tesla Model S Explodes on Autopilot After Colliding With Truck on Russian Highway.

According to media reports, police in Alberta were called following reports of 2019 Tesla Model S speeding on a highway near the town of Ponoka. The officers said that no one could be seen in the front seats. The car appeared to be self-driving, travelling over 140 kmph with both front seats completely reclined and occupants appeared to be asleep. The 20-year-old driver from British Columbia, had his licence suspended for 24 hours for fatigue and has been charged with speeding as well. “The driver received a dangerous driving charge and summons for court,” an Alberta Police was quoted saying in the report. Tesla Driver Who Died in 2018 Autopilot Crash in California Was Playing Video Game on His Smartphone.

Tesla’s auto-pilot feature allows the vehicle to steer, accelerate and brake automatically in a single lane. However, the company underlines on its website that this “does not make the vehicle autonomous,” and requires drivers to pay attention and not keep their hands off the wheel. German Man ‘Accidentally’ Buys 28 Tesla Cars Online Worth $1.5 Million Owing to Technical Glitch! Wait, What?

It is important to note here that it is not the first time that drivers have trusted Tesla self-driven car’s auto-pilot feature too readily. In August 2019, a driver in California too fell asleep. Many other incidents occurred where Tesla’s autopilot even turned into deadly car crashes leading to severe injuries.

(The above story first appeared on LatestLY on Sep 18, 2020 05:46 PM IST. For more news and updates on politics, world, sports, entertainment and lifestyle, log on to our website latestly.com).