The upcoming Sonet sub-compact SUV ahead of its India debut that is slated for the next month. It is the first rendering of the new production-ready Sonet SUV, that will be making its global premiere in India on August 7, 2020. 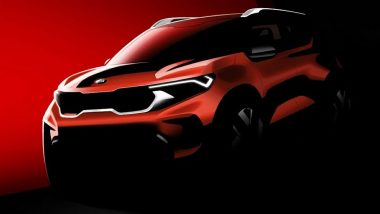 Kia Motors India has officially teased the upcoming Sonet sub-compact SUV ahead of its India debut that is slated for the next month. It is the first rendering of the new production-ready Sonet SUV, that will be making its global premiere in India on August 7, 2020. The company had revealed the Sonet Concept earlier this year at the Auto Expo. The Maruti Vitara Brezza rival will be Kia's second Made in India product, following the Seltos SUV. The carmaker will be launching the SUV in India during the festival period. BS6 Maruti Suzuki S-Cross Petrol Launching in India on August 5; Expected Prices, Features & Specifications.

The carmaker is already enjoying the much-deserved success with the Seltos. Now the manufacturer is looking to amplify the success with the upcoming Kia Seltos SUV. It will be carmaker's third product in India, after Seltos and Carnival. It is important to note that the Carnival MPV was launched at the 2020 Delhi Auto Expo. It was a part of Kia showcasing alongside Sonet concept at the Expo.

He's got the guts. She's got the looks. Beyond that, they've got something that's wilder than your imagination. Taking you on a wild adventure in their all-new #KiaSonet. Catch the #SonetWorldPremiere on 07th Aug 2020.#WildByDesign#SonetIsComing #ComingSoon

The official rendering highlights the bold design of the SUV which is attributed to features such as signature-style Tiger-nose grille, LED DRLs, silver roof rails, contrast black ORVMs. The render does not reveal the rear design of the SUV. However, the recently leaked spy images give a fair bit of design outlook ahead of its launch. 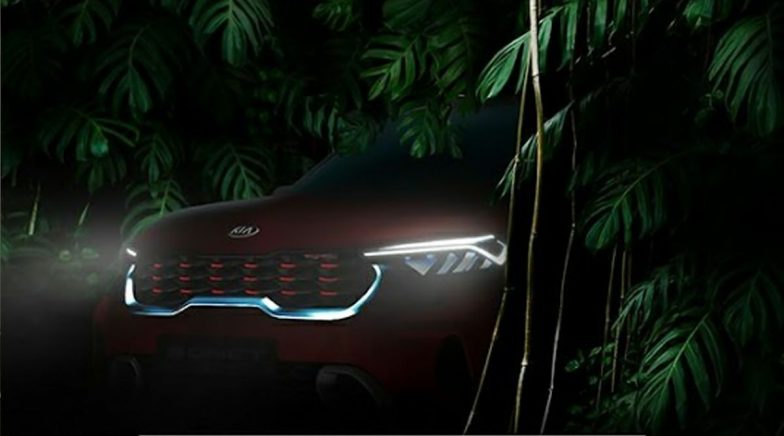 When launched, the newest offering from Kia Motors India will be pitted against the likes of the Maruti Suzuki Vitara Brezza, Ford EcoSport, Tata Nexon, Mahindra XUV300 & Hyundai's Venue in the competitive sub-4m segment. As far as the prices are concerned, the SUV is likely to be priced in the bracket of Rs 6.5 lakh to Rs 10 lakh (Ex-showroom). 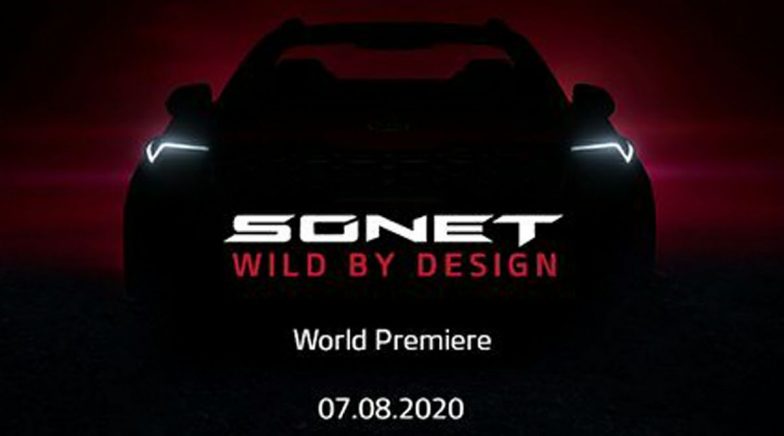 Coming to the mechanical front, the five-seater SUV will be sharing its powertrains and underpinnings with its cousin - Hyundai Venue. The SUV will be offered in three powertrain options - 1.2-litre naturally aspirated petrol unit, 1.5-litre CRDi diesel & 1.0-litre turbocharged GDI petrol. Transmission choices will comprise of manual as well as automatic units.

(The above story first appeared on LatestLY on Jul 23, 2020 04:37 PM IST. For more news and updates on politics, world, sports, entertainment and lifestyle, log on to our website latestly.com).