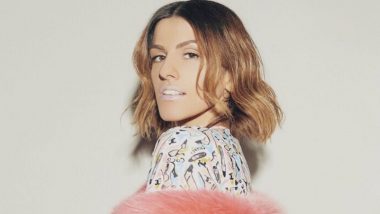 Mariami doesn’t do things the way other people would. How can she, when she’s not like other people.

Other people wouldn’t have been living in New York City as a 19-year-old and given up socializing for the sake of their music, and they certainly wouldn’t have spent every last cent on studio time.

Then again, releasing your first album before you turn 20 tells the world that you’re a little bit different.

Mariami moved to America from the Soviet Union in order to escape its collapse and she’s been on the move ever since, but not always in a straight line. Life’s more fun when you addin a few wiggles, and you just have to take one listen to her intoxicating blend of R&B, soul and pop and to realize that Mariami values fun at a premium.

She started her journey by working at WERS 99.8FM and moved on to Putumayo World Music, where Mariami was the assistant to the president - which taught her a lot about how the music business works and the fundamentals of executive function.

Mariami has also shown herself to be fearless, as anyone who wants to break through intothe music industry has to be. She moved from New York to Los Angeles in order to further realize the potential of her sound and has showcased her unique passion for music and business throughout her time on the circuit.

The personal journey she’s been on came full circle when she went back to the region of her birth, and armed with an FSA grant from the US embassy, engaged in charity work teaching music to internally displaced children.

Mariami’s life has been full and rich, and it’s only getting started. Explore her past and dive into her future in the interview below.

Where did you go to school in the US?

I fulfilled my BA at Emerson College and obtained a minor in music from Berklee College of Music at the same time. I also did the Circle In The Square, Musical Theater program in NYC in between semesters when I was at Emerson.

When did you start working in the music industry?

I started working at my college radio station WERS 88.9FM and later at Putumayo World Music, where I was the assistant to the president. My career path was far from linear. I began in the corporate world and simultaneously juggled growing a brand with internships, waiting tables at busy NYC restaurants and gigs in hospitality and nightlife. I was a bottle girl at Pop Burger and then worked in many NYC restaurants, all my money would go to studio time. I was so dedicated to finishing my album that there were long periods where I wouldn’t socialize. Sometimes 3-4 month windows of self induced quarantine haha. I’d just work, go straight home and write music and then spend all my earnings on studio time.

What are the best moments from your musical journey?

In 2015 I was endowed the FSA Grant by the US Embassy to Georgia to teach music masterclasses in Eastern Europe to internally displaced children. That was epic! Later that year my album Gates got featured in the 2015 WWDC Apple Keynote. It was pretty wild to see it up on the Apple screen alongside some heavyweights like Diplo and Ziggy Marley.Billions of worldwide impressions were gained in that moment, it was an honor to be included in that presentation!

How would you describe your genre?

As an immigrant child growing up in New York city, the cultural gap sometimes created a barrier between me and the culture. So the way I understood and translated the world around me was through my music, which was highly influenced by my Georgian roots. I love exploring new ways to use my voice and pushing the limits of my art! Writing across multiple genres (R&B, pop, EDM, soul) allows for versatility and diversity in my writing range. My sound has come to be a mixture of Georgian folk influences, soul, pop and retro-nostalgic elements from 70’s and 80’s music.

What drove you to achieve so much success?

If you have a clear vision for what you want your life to look like, make it happen! It was super important to me to form my own schedule and to live life on my terms. I also had very specific ideas for how I wanted my music to sound. I think you have to have that edge to you to run your own business. I was always an overachiever, and that fueled the entrepreneurial side of me. My dad owns his own business and he always encouraged me and my siblings to pursue challenging goals. He also modeled very high standards for us coupled with really tough love haha, so that influence from him really pushed me to get good grades (I was the Salutatorian of my class) and then to get into a competitive school for Arts. It took some convincing for him to trust that a career in art would be sustainable, but when he started to see results, he knew I was made for it.