It is quite surreal to know and learn about all those people and professionals who have strived to work not only to gain prominence in their endeavours but also make a profound impact on people's lives for the better. 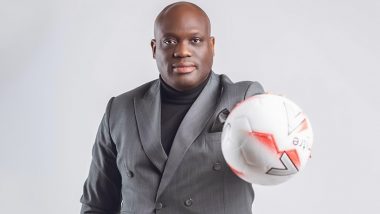 Dr Drew Uyi
It is quite surreal to know and learn about all those people and professionals who have strived to work not only to gain prominence in their endeavours but also make a profound impact on people's lives for the better. All these people work for a certain goal and aim to be fulfilled in life, where they go ahead in becoming the change-makers in society. We came across one such talented and passionate professional named Dr Drew Uyi from the UK, who serves as a licenced football agent, PR guru and brand strategist. He has earned massive momentum as an athlete brand expert who is concerned with the growth and success of athletes and footballers so that they can maximize their career through their power of Personal branding.
Dr Drew Uyi, who is called a Dr for his 'Spin Doctor' skills, proudly says that being an FA licenced football agent, he is gifted, schooled and drilled in the use of branding to grow the market values of the many athletes and footballers. Dr Drew Uyi was born in Birmingham, UK and did his primary education in Benin City, Edo State and before leaving Nigeria, completed his high school in Switzerland and Germany. Right since an early age, if anything that ever attracted Dr Drew Uyi the most, it was the idea to be in the sports business and create a unique name for himself by doing the greater good for all the athletes and footballers.
Getting into the sports business, he realized the amount of work to be done for deepening the narrative of African footballers and athletes. Hence, he decided to change the game and here he is today, a powerful force who has been behind the growth of the market value of the athletes and footballers. Dr Drew Uyi has sculpted a very influential career for himself as the brand builder for pro athletes and talents. All the top athletes with whom Dr Drew Uyi worked so far are of the opinion that he is more than just an agent, who doesn't close the deal after a transfer deal, but take the matter forward by branding to help players and athletes find their identity and earn additional income, while active in sports and even after retiring.
Dr Drew Uyi's success can be attributed to his passion and commitment to help sports talents make more money apart from their salary, which has made the football agent stand apart from others in the industry. He highlights his strong view saying that footballers and athletes are 'dead' if they are not online. Dr Drew Uyi has earned massive momentum in the industry with his incredible talents in branding and PR, changing the game in the sports business.
To know more, follow him on Instagram @drewuyi.
Here's his IG link https://instagram.com/drewuyi?igshid=1ly7hxyvhprng
Comments
Tags:
Athlete Brand Expert Dr Drew Uyi Football Agent
Comments
You might also like