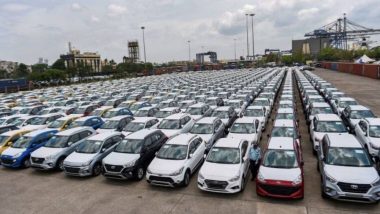 New Delhi, August 2: With the rolling back of mandatory long-term insurance package plans by Insurance Regulatory Development Authority of India (IRDAI) in place from August 1, the cost of buying a new car or a two-wheeler is expected to come down. Experts opine that the move will reduce the cost of first-year insurance for new four-wheelers and two-wheelers.

Expressing his opinion on the move, Policybazaar's Head-Motor Insurance -- Sajja Praveen Chowdary -- said, as quoted by CNBC TV18, "It will also bring down the upfront cost of vehicle ownership for a buyer. According to the new IRDAI norms, the mandatory long-term package cover for new four-wheelers and two-wheelers has been lifted. Supreme Court Bars Registration of BS-IV Vehicles Till Further Orders.

Earlier, the new car owners had to opt for long-term motor vehicle insurance packages for three years on a mandatory basis. Similarly, new two-wheelers owners had to pay for five years of long-term motor vehicle insurance packages. This included 'Motor Third Party (TP)’ and ‘Own Damage Insurances (OD)’ for 3 years on new cars, while the TP and OD were for 5 years on new two-wheelers.

The IRDAI had issued the directives after Supreme Court in August 2018 issued an order stating that all vehicles bought after September 1, 2018, must opt for Long Term Motor TP rules. Now, with IRDAI easying the norms for new vehicles, buyers will have the option to switch the 'Motor Own Damage' cover to another insurance company. However, TP and OD coverage and features will remain the same as before.

(The above story first appeared on LatestLY on Aug 02, 2020 12:58 PM IST. For more news and updates on politics, world, sports, entertainment and lifestyle, log on to our website latestly.com).