R2 RADIO, From Japan to the World 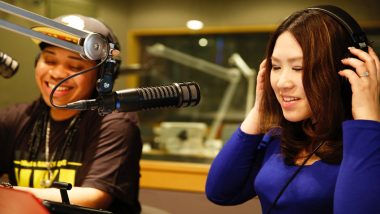 The show is a bilingual program (Eng/Jpn) that initially started on Interfm897Mhz, a popular commercial radio station in Tokyo. During their affiliation with the radio station, they educated Japanese listeners on the world of music and entertainment, played new music, and interviewed numerous artist, and entertainers that visited Japan. The show has since expanded from Tokyo to broadcasting worldwide through Pharcyde Tv.

Roro is a Recording Artist, Producer, and Radio host from Orlando, FL. He was born in a musical family; Thus, he started working in the industry of music when he was seven years old to follow in the ways of his family. Roro, was originally booked for a tour in Japan, but now calls the country his home and has performed in some of the biggest events in Japan, made several television appearances, and released an album throughout mainstream record stores in Japan.

Roro’s journey in radio started when he was interviewed on a station broadcasting out of Okinawa, Japan. After receiving positive reviews, he became a co-host, producer, and engineer for the show. A few years later, Roro was offered his own show Roro Radio at the popular station Lovefm76.1Mhz, located in Fukuoka. He would play new music and give his musical point of view to help Japanese listeners better understand American hip-hop and culture. He was then offered a hosting position at popular Tokyo station, Interfm897Mhz where he and his partner Risa Kumon would start R2 Radio. In an effort to broaden R2 Radio’s listeners, Roro and Risa would expand their show to stream episodes worldwide on the Pharcyde Tv network. On R2 Radio, Roro and Risa has interviewed Dj Jazzy Jeff, Terumasa Hino, Drum Tao, Mr. Doodle, Eric Benet and more.

Roro continues to grow the R2 Radio brand and hopes to be the bridge between Japanese and American music. For more info on Roro, Visit the links below.

Risa Kumon is a bilingual singer, songwriter, composer, and radio personality from Nagasaki, Japan. Her passion for music prompted her to launch several projects and perform at some of the most substantial events in Asia. In the media, Risa was a co-host for the LoveFm76.1Mhz show, Roro Radio, that played weekly in the Kyushu region of Japan in over eight cities. She later became a weekly radio presenter on R2 Radio at Interfm897Mhz. With time, she received her show RnB Selecta alongside R2 Radio. After a few years, Risa

Risa is excited to be a part of the Pharcyde Tv network and plans to showcase Japan’s distinctive culture to the world. You can find more information about Risa Kumon by visiting the links below.

In this episode, R2 Radio got a chance to interview Grammy Award-winning lead singer for The Dazz Band and Kool & the Gang, Skip Martin. While touring Japan, Skip stopped by the show to talk about his friendship tour, New music, Funny industry stories with Stevie Wonder, Rick James, Michael Jackson, Aretha Franklin and more! Watch the full episode —> https://www.youtube.com/ watch?v=_uxUvNpZxRQ&t

In this episode, R2 Radio interviewed the world-famous Japanese Drum entertainment group, DRUM TAO. Roro & Risa got a chance to sit down with DRUM TAO at Shinjuku Lumine Zero Theater for an exclusive interview about their start, worldwide tour stories, and the drum Tao lifestyle. Not only did they get an interview from them, but they were also able to film their live performances. Watch the full episode —> https://www.youtube.com/watch? v=3Aka1BoPNYA&t

R2 Radio interviewed popular Artist & Illustrator, Mr Doodle. Mr Doodle is from London but became a worldwide internet sensation with his doodling and artwork. He has grown to 2.8 million followers combined on social media and has worked with numerous companies such as MTV, Adidas, Samsung, Fendi, Hello Kitty, and more. While Mr Doodle was in Tokyo for his exhibition, Roro & Risa got a chance to sit with him and talk about his process, how he went from drawing in his room to drawing at exhibitions around the world and more. Watch the full episode —> https://www.youtube.com/watch?v=CCteQObjXqE&t