Royal Enfiled is all set to launch the all-new Meteor 350 motorcycle in the country next month. The Chennai-based bike maker has officially announced the launch date, which is scheduled for November 6, 2020. 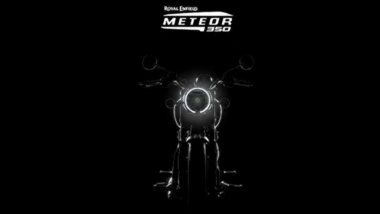 Royal Enfiled is all set to launch the all-new Meteor 350 motorcycle in the country next month. The Chennai-based bike maker has officially announced the launch date, which is scheduled for November 6, 2020. It will be introduced as a rival to the recently launched Honda H'Ness CB350. This will be an all-new product from Royal Enfield that has been built from scratch. This highly anticipated bike has been talking of the town, courtesy of its leaked images and details online. Here are the top five things you should miss about the upcoming RE bike. Royal Enfield Meteor 350 India Launch on November 6, 2020; Check Expected Price, Features & Specifications.

1. Royal Enfield's forthcoming Meteor 350 motorcycle will be replacing the short-run Thunderbird 350X. This new bike will also mark the introduction of modern-age technology on RE bikes, to compete against the competition.

2. The new Royal Enfield Meteor 350 is expected to be made available in three variants - Fireball, Stellar and Supernova. Out these three, Fireball will be an entry-level variant while the other two will be more feature-loaded ones.

5. The bike will sport a new twin-pod cluster instrument console with an analogue speedometer and a TFT colour display offering navigation details. The smaller unit will be called as a Tripper Navigation Unit. It will also get Bluetooth connectivity.

6. Mechanically, the bike will come equipped with an all-new 349 cc, air-cooled, single-cylinder BS6-compliant engine. It will churn out 20.5 hp and 27 Nm of torque. The motor will be slightly tweaked to produce more power than the UCE Thunderbird 350. The RE Thunderbird 350X bike offered power figures of 19.8hp and 28Nm.

7. As far as the prices are concerned, the new bike is expected to be launched in the bracket Rs 1.60 lakh to Rs 1.90 lakh (all prices ex-showroom).

(The above story first appeared on LatestLY on Oct 26, 2020 10:37 AM IST. For more news and updates on politics, world, sports, entertainment and lifestyle, log on to our website latestly.com).