Yogisuperpug Setting Trends on TikTok After Rising to Popularity During Lockdown 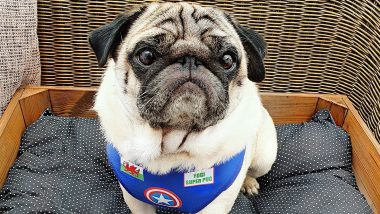 Yogisuperpug has become the latest pug to rise to global stardom following the lockdown that saw millions stay at home to battle COVID-19.

Yogi, a 4-year-old pug, rose to global prominence in just a few short weeks after hitting social media with the most adorable videos you can imagine. From eating ice cream to wearing the latest fashionable dog clothes, Yogi has managed to capture hearts and minds around the world.

Since the start of the year, the young pug’s TikTok channel has grown quickly to more than 100,000 followers in record time, with celebrities tuning in to show their love for his fun and adorable reactions - and pledging their support for his next adventures. From his hilarious reactions to political speeches to his superhero antics, he’s unlike any other pug we’ve seen so far.

With TikTok’s viral growth, young stars and dog lovers alike have been able to mingle and share laughter during difficult times. And thanks to the real-world impact short viral videos can have on people’s spirits, Yogisuperpug is providing that much needed cheer we all need right now.

Among his biggest fans include the likes of Tati and Kyle Thomas, two of TikTok’s biggest stars who can’t get enough of his adorableness. And it’s not just celebrities that are taking note. His owner, Justin, who had the idea of starting the channel during the lockdown, has received an outpouring of support from other dog lovers and owners who have been inspired by the videos of Yogi - and the success of Yogisuperpug.

Following the viral growth of the account, the young pug and his owner are now working with nonprofit PDWRA - The Pug Dog Welfare & Rescue Association, to help support other dogs and find them new homes.

We are just loving Yogi’s channel and hope you will too. To discover more, visit Yogisuperpug and follow him on TikTok or Instagram.