Abhishek A Bachchan! Actor Adds 'A' in his Name for Breathe Into the Shadows and Twitterati Notice His Name Change

Since his debut in 2000, Abhishek Bachchan never added his father's initials to his name in the film credits. However, he made the exception with his digital debut with Breathe Into The Shadows. 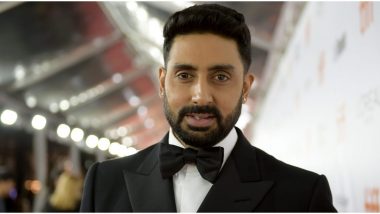 Abhishek Bachchan has now added 'A' to his name. The actor goes by Abhishek A Bachchan in the credits of his recent web series, Breathe Into The Shadows and we aren't the only ones who have noticed his name change. Twitterverse is currently noticing and discussing Jr Bachchan's name change and there's only positivity all around. Abhishek A Bachchan obviously stands for Abhishek Amitabh Bachchan and the recent addition has only garnered positive reactions from his fans. Breathe Into the Shadows: Twitterati is Impressed With Abhishek Bachchan's Web Debut, Hail all the Performances.

While the reason behind his inclusion is still not known, we are glad and support his decision wholeheartedly. This is probably the first time when Jr Bachchan has added his father's initials to his name and we wonder what prompted his decision. Nonetheless, Twitterati is noticing his new name in the credits of Breathe Into the Shadows and here's how they are reacting to it. Breathe Into The Shadows Review: Here’s What Critics Are Saying About Abhishek Bachchan, Nithya Menen, Amit Sadh’s Thriller Series On Amazon Prime!

Yes, it is the First Time

This is probably the first time ever @juniorbachchan has been credited as “Abhishek A. Bachchan” on screen. 😲

Point no 1: It's Abhishek A Bachchan this time. I like! 🤓 @juniorbachchan

Fans and Admirers are Happy In Fact

.@juniorbachchan's name appears as Abhishek A. Bachchan for the first time in opening credits of season 2 of #Breathe. Wishing Jr. B all the best for his new innings. Can't wait to see what's behind the #shadows.

That's How His Name Reads in the Credits

It Can Be Anyone But Why Care?

What is that "A" this is some Sherlock level Stuff. Who is that A https://t.co/RzaTmKWLcm

Audiences are Already Referring to Him as Abhishek A Bachchan

@juniorbachchan My Best Wishes to Mr ABHISHEK A BACHCHAN for BREATHE. Streaming Now on Amazon Prime. God Bless U

From his debut with Refugee in 2000 to his last release, Manmarziyaan in 2018, AB Jr had never used his father's initials in his name. But this instance for his digital debut certainly makes his decision a lot more special.

(The above story first appeared on LatestLY on Jul 10, 2020 10:12 PM IST. For more news and updates on politics, world, sports, entertainment and lifestyle, log on to our website latestly.com).