The actress along with her rumoured boyfriend Nick Jonas returned from their Goa trip and both were spotted at Ambani residence for the pre-engagement party. 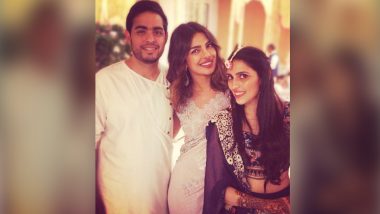 The wedding festivities of Akash Ambani and Shloka Mehta kickstarted with a private pre-engagement ceremony in Mumbai. Earlier in March Akash had proposed to his girlfriend in Shloka in Goa. While the wedding is scheduled to be held in Mumbai later this year, the two are set to get engaged on June 30 at Ambani residence in Mumbai. The event was graced by several well-known faces, including our desi girl Priyanka Chopra. The actress along with her rumoured boyfriend Nick Jonas returned from their Goa trip and both were spotted at Ambani residence for the pre-engagement party. The actress shared an adorable picture with soon-to-be married couple.

Priyanka entered the private bash thrown by Ambani’s in Tarun Tahiliani couture lilac georgette saree with lace and French knot applique border. She looked elegant and glamourous with her tresses were styled in loose waves and she donned a nice plum lipstick giving a factor of oomph to her entire look.

The actress shared the image with the couple and wrote a sweet caption to go along with her post, which read: “Congratulations Akash and Shloka! Such a beautiful ceremony. Mehendi hain rachne wali. Love you both. Pre, pre-engagement party.”

(The above story first appeared on LatestLY on Jun 28, 2018 09:39 AM IST. For more news and updates on politics, world, sports, entertainment and lifestyle, log on to our website latestly.com).