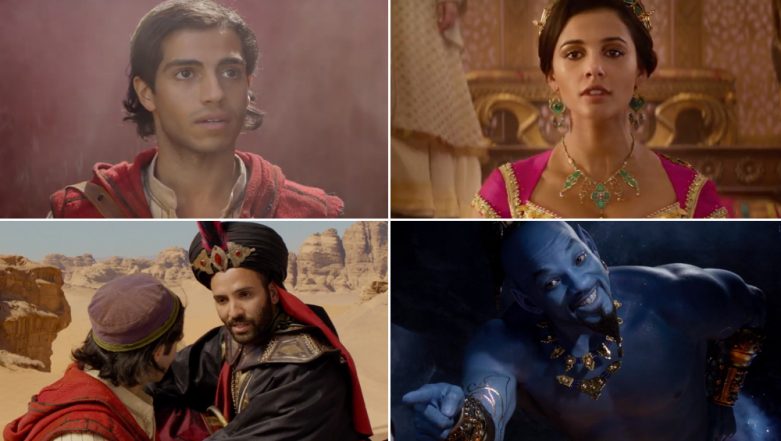 Last Friday, three new films arrived in cinema halls but only one of them has got cash registers ringing big time and its Hollywood biggie Aladdin. Yes, while India's Most Wanted and PM Narendra Modi are trying to stay afloat at the Indian box office, Aladdin on the other hand, is minting big moolah The live-action movie starring Will Smith in the lead got off to a good start on day 1 ended up raking in Rs 4.25 crore. On day 2, the collections further went up and Guy Ritchie's directorial venture collected Rs 6.50 crore. Aladdin Box Office Collection Day 1: Will Smith Starrer Performs Better Than India's Most Wanted and PM Narendra Modi on Friday, Collects Rs 4.25 Crore

Announcing the updated figures, film trade analyst Taran Adarsh took to the microblogging site Twitter a while back and wrote, "#Aladdin dominates, maintains a strong lead on Day 2... Faring much, much better than #Hindi releases, but it can do with higher numbers thanks to the merits and genre... Fri 4.25 cr, Sat 6.50 cr. Total: ₹ 10.75 cr Nett BOC. India biz. Gross BOC: ₹ 12.80 cr. All versions."

Co-starring Mena Massoud, Naomi Scott, Marwan Kenzari, Navid Negahban, Nasim Pedrad, and Billy Magnussen, Aladdin opened to good reviews across the globe and has been performing well in the US as well. In fact, it has already grossed around $109 million in its four-day opening weekend in the US which is mighty impressive. Will Smith’s Aladdin Grosses $109 Million on Its Opening Weekend at the USA Box-Office

With hardly any compeition in India, Aladdin will continue to draw the audience in the cinema halls. It could very well cross the Rs 50 crore mark as well if it keeps trending well on weekdays too. Till Salman Khan starrer Bharat releases, the Hollywood release will indeed have a smooth ride at the ticket windows.