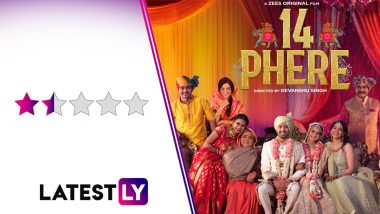 14 Phere Movie Review: 14 Phere is a romantic social comedy that is directed by Devanshu Singh and written by Manoj Kalwani. Vikrant Massey and Kriti Kharbanda play the main leads in the film, that also stars Gauahar Khan, Vineet Kumar, Jameel Khan, Yamini Das and Priyanshu Singh. Riju Das is the cinematographer of the film, while Manan Sagar is the editor. Rajeev V Bhalla and JAM8 have scored the music for 14 Phere. 14 Phere: Vikrant Massey and Kriti Kharbanda’s Social Comedy to Premiere on ZEE5 on July 23!

Now I know I shouldn't have much hopes for a film, when one of its most irritating characters calls herself 'Delhi ki Meryl Streep'. I don't know who is getting insulted more in the process - Delhi or Meryl Streep. But I believe that Ms Streep should take solace in the fact that there are other aspects than her name that are getting besmirched in 14 Phere - our sense of humour, our intelligence and whoever is reading scripts for Vikrant Massey.

14 Phere is about the double wedding for two love-birds Sanjay Lal Singh (Vikrant Massey) and Aditi (Kriti Kharbanda). Their romance has begun from college, and now they are living together and are working in the same company, where it is considered quite cool for them to show their PDA. No one even says the 'N' word when Aditi suggests to her manager that Sanjay tag along with her to US for a project.

The one thing that is cool about their relationship is that Aditi is senior to Sanjay both in age and at work. However, the couple's families ain't that cool. You see, Sanjay comes from a Rajput family in Bihar, and Aditi is from a Rajasthani Jat family. Now before you Google to see if these castes are on the same level - I did - the movie reiterates that it doesn't matter. Sanjay's father wants him to marry a Rajput girl, and Aditi's a Jat boy.

So what's the best logical thing for the couple to do? Instead of eloping to US - as Aditi wanted to do initially - Sanjay instead plans an elaborate double hoax of lying to both their families that the person they are marrying belongs to their respective caste. They even go on to hire 'actors' (Jameel Khan and Gauahar Khan) to play their parents to present to each side.

Does it work? For all the precautions that Aditi and Sanjay took, they began to leave out several holes that needed to be plugged in their fake play. Like, asking Sanjay's cousin to take a print of their airline ticket which has the real surname of Aditi. That's how 'solid' their plan is.

The narrative of 14 Phere is inspired by yesteryear deceptive comedy classics like Golmaal and Chameli Ki Shaadi, which ain't a bad thing. What's bad is setting the film in the present smartphone era, where details of a person can easily be retrieved within seconds. It would be made even easier when the families are super-rich with big connections in police and businesses. OTT Releases of the Week: Shilpa Shetty Kundra’s Hungama 2; Vikrant Massey’s 14 Phere on ZEE5; Ventakesh’s Narappa on Amazon Prime Video and More.

I am also curious to know why so many of the couple's work-colleagues end up impersonating other people to help them out, when doing so could have landed them in big trouble.

Chalo, let's imagine for the sake of 14 Phere's thankfully two-hour-runtime that Sanjay-Aditi work in the coolest company of the country, that allows PDA and gives ample leaves to the employees to attend faux weddings. What's hard to like about the movie is how it handles inter-caste marriages. For one, we are not given much scope to even care for the lead couple's love story. Secondly, 14 Phere takes a very convenient, and moreover, flimsy take on honour killing and caste divide. I can't find any humour in Sanjay's father's (Vineet Kumar) repeated mention of killing his kin for marrying outside their caste. With neither of the lead belonging to any backward caste, the stakes are much, much lower and what we see in the name of casteism comes across as farce.

Seriously, why does Bollywood shy away from having protagonists belonging to backward castes? Maybe then you won't be having a comedy, you would end up making a hard-hitting film like Sairaat. Oh wait, Bollywood didn't do that! They instead made a glammed up remake that stripped off the social commentary and caste divide into a puerile Dhadak!

So when your foundations aren't strong enough, it is difficult to even care for what the young couple want to achieve by tricking their families to get their happy ending. To make matters worse, all their trickery culminate in a truly ludicrous climax that will leave you shaking your heads. That is, if you care enough for poor Massey to stay till the end. Both Massey and Kriti Kharbanda make a decent pair, but I wish that this pairing came with a better film.

14 Phere is a film about a double wedding, but it is a double headache to the viewer, when the script isn't that smart or funny enough to keep us invested. 14 Phere is streaming on Zee5 India.

(The above story first appeared on LatestLY on Jul 23, 2021 12:00 PM IST. For more news and updates on politics, world, sports, entertainment and lifestyle, log on to our website latestly.com).