In the video shared on Twitter, we can see the three actors audition for the film. Rajkummar, Sushant and Amit are reading out lines from the script and enacting the scenes from the film. 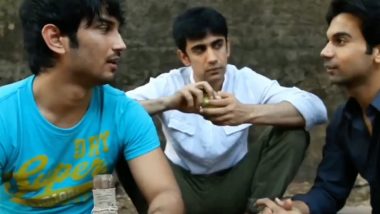 Kai Po Che was an amazing film that still has a special place in everyone's heart. The film marked late actor Sushant Singh Rajput's film debut where he was seen sharing the screen space with newbies Rajkummar Rao and Amit Sadh. The film which was based on Chetan Bhagat's novel Three Mistakes Of My Life opened up an avenue for the late actor and people love the performances of all the actors in the film. Sushant Singh Rajput's Kai Po Che and Kedarnath Director Abhishek and Wife Pragya Kapoor to Feed 3400 Families to Honour the Late Actor.

The film has completed 8 years today and a video of Rao, Singh and Sadh is going viral on the internet. In the video shared on Twitter, we can see the three actors audition for the film. Rajkummar, Sushant and Amit are reading out lines from the script and enacting the scenes from the film. One scene shows them in a serious situation where they talk about some money while in another we see them ride along on a bike. The video sure brings back a lot of memories and makes you miss the actor.

Director Abhishek Kapoor also went down the memory lane as his critically acclaimed film, Kai Po Che completed 8 years. He took to Twitter to say, "The thrill of starting this journey with a new team hungry 2 give their best at the dawn of their careers stands most vividly in mind. One cant quantify the love our film continues to receive over the years, neither can we quantify the pain we feel at the loss of our crown jewel." He mentioned Sushant Singh as the 'crown jewel', talking about his demise last year. Sushant Singh Rajput’s Kai Po Che! Co-Actor, Mumbai Indians Cricketer Digvijay Deshmukh Reveals About a Promise Made to the Late Actor He Failed to Fulfil.

Sushant had essayed the role of Ishaan, a failed cricketer in the movie. In an old video, he was seen saying, “I’ve been thinking about Ishaan 90 per cent of the time, for the past four months. Nowadays, it seems that I’ve started living and thinking like him. It is not that it happened because of this reason or that reason. It just happened.” Sushant’s last onscreen appearance was in Dil Bechara which released post his death.

(The above story first appeared on LatestLY on Feb 22, 2021 03:16 PM IST. For more news and updates on politics, world, sports, entertainment and lifestyle, log on to our website latestly.com).