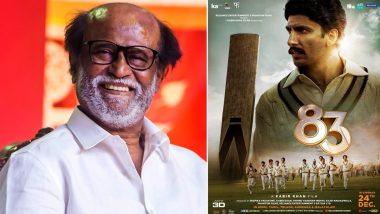 Megastar Rajinikanth is the latest to join the list of people who have lavished praise on the recently released cricket epic '83', which showcases the journey of India's triumph at the 1983 World Cup. Rajinikanth, who took to Twitter to share his opinion about the film, said, "#83TheMovie wow what a movie… magnificent!!! Many congratulations to the producers." 83 Movie Review: Suniel Shetty Says He ‘Couldn’t Spot’ Ranveer Singh in His Kapil Dev Act (Deets Inside).

#83TheMovie wow 👏🏻👏🏻 what a movie… magnificent!!! Many congratulations to the producers @kabirkhankk@therealkapildev@RanveerOfficial@JiivaOfficial and all the cast and crew …

(The above story first appeared on LatestLY on Dec 28, 2021 07:56 PM IST. For more news and updates on politics, world, sports, entertainment and lifestyle, log on to our website latestly.com).