Amid the pandemic, one of the most awaited films namely 99 Songs released in theatres today (April 16). he musical drama stars debutants Ehan Bhat and Edilsy Vargas in lead roles. So, is the flick, worth a watch or not? Well, early reviews are out and going by it we sense a mixed response. Have a look. 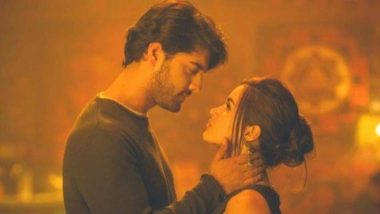 Amid the pandemic, one of the most awaited films namely 99 Songs released in theatres today (April 16). Helmed by Vishwesh Krishnamoorthy, the multi-lingual film is backed by AR Rahman and has been the talk of the town for quite a long time. Right from the posters to the trailers, the movie has grabbed the attention of many. The musical drama stars debutants Ehan Bhat and Edilsy Vargas in lead roles. So, is the flick, worth a watch or not? Well, early reviews are out and going by it we sense a mixed response. Have a look. 99 Songs Trailer Out! AR Rahman’s Musical Movie Is All About Love, Dreams and Ambition! (Watch Video).

NDTV gives 2,5 stars and writes, "The two newcomers in the cast - Ehan Bhat and Edilsy Vargas - appear to be up to the task of carrying the film on their shoulders but the characters they are saddled with lack genuine meat. The premise is flimsy: a young pianist thwarted in love finds himself up against the challenge of making a whole load of music as a means to impressing the father of the mute girl he wants to marry."

Firstpost mentions, "Rahul Ram, Lisa Ray and Manisha Koirala play characters who nudge along Jay’s story. Krishnamoorthy’s sweeping and fantastical visualisation is supported by the cinematography (Tanay Satam and James Cowley) and production design (Aparna Raina) and Rahman’s songs are sung by Sashwat Singh as Jay’s singing voice. This is Rahman unfettered by studios and someone else’s vision. It’s a collaborative creation that thoughtfully embraces the theatrical musical genre."

Bollywood Life lauds Ehan Bhat, but feels that the movie is forgettable -"99 Songs is a treat for any music lover. If you are upset with the rampant remixes and party songs, you will love the album even more. Ehan Bhat is also extremely watchable as Jay. If you ignore the glitches in story-telling, you can easily watch this one due to the music." AR Rahman Speaks to LatestLY on 99 Songs, When He Pulled a Viral Prank on an Anchor And His Love for Music (Watch Exclusive Video).

Scroll pens, "The 133-minute movie’s moralistic attitude towards unruly, freewheeling musicians makes Jai a very good but also a very dull boy. The montage-heavy song sequences that resemble music videos, barely fleshed-out characters, and stretches of time-stretching exposition bloat a simple and simplistic movie about an artist reconnecting with the one thing that gives him happiness and peace."

(The above story first appeared on LatestLY on Apr 16, 2021 12:57 PM IST. For more news and updates on politics, world, sports, entertainment and lifestyle, log on to our website latestly.com).