After Anubhav Sinha Comes Out in Support of Kartik Aaryan, Twitterati Reminds Him of Sidharth Malhotra - Here's What Happened

Kartik Aaryan leaving projects or getting ousted from projects is hitting the headlines too often these days. Anubhav Sinha has come out in support of the actor calling it a concerted campaign against him. But Twitterati reminded him about his film with Sidharth Malhotra that never happened. Know all about it here. 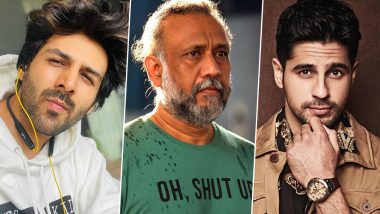 Anubhav Sinha has now reacted to the rampant loss of projects by Kartik Aaryan. It all began with Dostana 2, then there are rumours about the actor quitting Shah Rukh Khan's production Freddie along with an Aanand L Rai movie. While Dharma Productions revealed they are recasting Dostana 2, Rai's Colour Yellow Productions released a statement dismissing the rumours saying talks with Kartik are still on for a separate film. All this made Sinha tweet that there seems to be a concerted campaign against Kartik which is unfair. It's good to see someone openly supporting the Pyaar Ka Punchanam actor.  But Twitterati is quick to remind Sinha of Sidharth Malhotra here. Let us tell you why. Kartik Aaryan Reminisces ‘Silvat’ Days, Thanks Filmmaker Tanuja Chandra for an Amazing Experience (Watch Trailer)

Sidharth in one of his interviews with DNA had revealed about an Anubhav Sinha film that he was supposed to debut with before Student of The Year. He said, "When I came to Mumbai, I was selected to be a hero in an Anubhav Sinha film. I spent six-seven months, but it never happened. The accommodation that they gave me was taken away from me. So, I had to stay with a friend." Twitterati thus believes Sinha didn't keep his promise to an outsider. But that isn't true. If you read Sidharth's this interview, the actor did not blame Sinha for choosing someone else over him or ousting him from the project. There are many movies signed by actors which never materialise for various reasons. Blaming Sinha is wrong here we feel. Kartik Aaryan Recreates Kate Winslet’s Iconic Titanic ‘Painting’ Moment, Thinks He Did It Better

And by the way... when Producers drop Actors or vice versa they don't talk about it. It happens all the time. This campaign against Kartik Aryarn seems concerted to me and very bloody unfair. I respect his quiet.

Now check out the reactions

An outsider in Bollywood

Sid came to mumbai because He was supposed to do a film with you. He stayed there for eight months to train himself for that film, and you moved on to make Some other movie without even informing him which tells a lot about how bollywood treats outsiders! https://t.co/sOczwPVObj

We still remember what you did with Sidharth Malhotra! So STFU!! https://t.co/sOczwPVObj

What u did to Sidharth Malhotra???

U r then monster bc. Who love to portrait good image In SM & infront of New public &monster from inside .

Meanwhile, Kartik is busy sharing how much his fans love him and thanking people who showed belief in him. Like Sinha mentions, we are also liking how the actor is keeping quiet on all the rumours.

(The above story first appeared on LatestLY on Jun 04, 2021 12:48 PM IST. For more news and updates on politics, world, sports, entertainment and lifestyle, log on to our website latestly.com).