Akshay Kumar and Paresh Rawal To Reunite for ‘Oh My God’ Sequel? (Deets Inside)

Are you the one who enjoy Akshay Kumar and Paresh Rawal’s deadly combo? Then here comes good news for you as the two might hopefully be soon in a single frame soon. The two are set to reunite for a sequel of OMG: Oh My God. Read on. 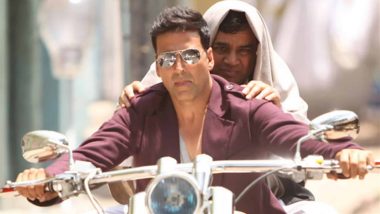 Are you the one who enjoy Akshay Kumar and Paresh Rawal’s deadly combo? Then here comes good news for you as the two might hopefully be soon in a single frame soon. Yes, you right that right. After delivering hits like Hera Pheri, Phir Hera Pheri, Welcome, Oh My God, Awara Paagal Deewana and more, the duo is reportedly set to reunite for a sequel of OMG: Oh My God. As per Pinkvilla, Akki and Paresh’s collaboration is happening. The report further suggests that OMG 2 will be produced by Ashwin Varde along with Akshay himself. Bachchan Pandey: Akshay Kumar’s Actioner To Hit the Silver Screen on Republic Day 2022!

Spilling beans about the reunion, a source close to the development told the portal, “Akshay, Paresh, Ashwin and the entire gang have been keen to make Oh My God 2 for the longest time and have been brainstorming on different ideas to come up with a story that’s better than the first part. And after several years of research and brainstorming, they have finally locked a script that does justice to the legacy of first part.” Akshay Kumar’s Bachchan Pandey Goes on Floor in Jaisalmer; Kriti Sanon, Sajid Nadiadwala’s Sons Give Clap for First Shot (View Pics).

“Even as he was shooting for Atrangi Re, he was in constant touch with Ashwin over the script of Oh My God and in-fact the two even met on the set in Delhi to discuss on the pre-production process, other members of the cast and the way forward. The script is locked, and the film is ready to go on the floors as early as summer 2021,” the source added. Fau-G: Twitterati Accuses Akshay Kumar’s PUBG Alternative Gaming App of Plagiarising Poster (View Pic).

It’s a fresh story, with a fresh outlook at the things around us,” the source concluded. Reportedly, Umesh Shukla who helmed OMG will not wear the director’s hat for part two. Workwise, Akki was last seen as a transgender in Laxmii and has many projects lined up which includes Bachchan Pandey, Atrangi Re and more. Stay tuned!

(The above story first appeared on LatestLY on Jan 24, 2021 09:15 AM IST. For more news and updates on politics, world, sports, entertainment and lifestyle, log on to our website latestly.com).