The cinema halls in UAE re-opened from May 27 and the exhibitors have started to re-release films. Owing to the ongoing crisis, several countries across the globe had to shut down the cinema halls in order to avoid mass gathering. 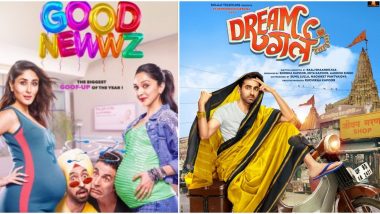 Owing to the ongoing crisis, several countries across the globe, shut down the cinema halls in order to avoid mass gathering. This was done in order to curb the further spread of COVID-19. After issuing lockdown for months, several countries have lifted the lockdown or issued relaxations. After the standstill, the theatres in UAE have finally reopened. The cinema halls in UAE reopened from May 27 and the exhibitors have started to re-release films. Iron Man 3 and The Avengers to Be Re-Released in Hong Kong Cinemas After COVID-19 Lockdown Restrictions Get Lifted.

One of the popular films that was re-released in UAE theatres was Tiger Shroff – Shraddha Kapoor starrer Baaghi 3. After seeing the positive response, as per a report on Mid-Day, several filmmakers are considering to re-release their films and among them are Good Newwz and Dream Girl. Both these Bollywood films were a huge hit when it was released and now it is said that these films will hit the big screens again on June 11. Tiger Shroff Hopes Baaghi 3 Will Re-Release After The Lockdown Is Over But That Might Not Happen - Here's Why.

(The above story first appeared on LatestLY on Jun 08, 2020 09:20 AM IST. For more news and updates on politics, world, sports, entertainment and lifestyle, log on to our website latestly.com).