Alia Bhatt to Collaborate With Kartik Aaryan for a Sharan Sharma Film?

Apart from this possible project, Alia will be seen sharing the same screen space for the first time with boyfriend Ranbir Kapoor in Ayan Mukherji's directorial Brahmastra where Kartik has Dostana 2, Bhool Bhulaiyaa 2. 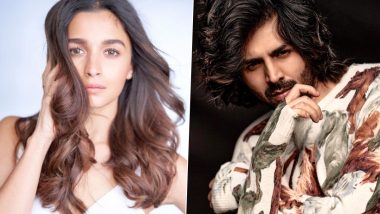 Alia Bhatt and Kartik Aaryan are currently one of the busiest stars in the industry. The two have given many successful films in the past but is one jodi people never saw together on the big screen. The two already have many projects on their plates respectively but new reports suggest that they are probably coming on board together for a film. It is being reported that Sharan Sharma, who directed Gunjan Saxena: The Kargil Girl, is planning on doing a film with the duo. Alia Bhatt and Kartik Aaryan in Sanjay Leela Bhansali's Film on Gangubai Kothewali?

According to reports in Pinkvilla, a source close to the development has informed that Sharan has a nice story in hand and has approached Kartik and Alia for the lead roles. “Alia Bhatt and Kartik Aaryan are on top of Shahran’s wishlist. He has had a preliminary meeting with them for the film. However, he is presently in the stage of locking the final script, after which he'll have a few more meetings with the actors. The film is expected to roll by the end of the year,” revealed the source. It is also being said that just like Sharan's debut film Gunjan Saxena, Karan Johar will produce this film too.

As for Kartik, he has Dostana 2 alongside Janhvi Kapoor and Lakshya Lalwani and a Shah Rukh Khan production film. He is also part of Ajay Bahl, Rohit Dhawan directed Ala Vaikunthapurramuloo remake and Bhool Bhulaiyaa 2. Kartik will also feature in a superhero film. He is also reportedly in talks with Sanjay Leela Bhansali and Aanand L. Rai for different projects.

(The above story first appeared on LatestLY on Feb 10, 2021 06:55 PM IST. For more news and updates on politics, world, sports, entertainment and lifestyle, log on to our website latestly.com).