If reports are to be believed, then Alia Bhatt has given her nod to star in Sanjay Leela Bhansali's Heera Mandi. This one is going to be a web-series wherein apart from her there will be other female leads too. Check it out. 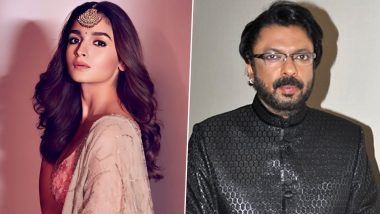 Looks like there is no stopping to the very talented Alia Bhat! As after making fans go gaga over her acting skills in Gully Boy, Raazi and also impressing one and all in the recently released trailer of Gangubai Kathiawadi, she has now added one more gem to her crown. If reports are to be believed, then Alia has given her nod to star in Sanjay Leela Bhansali's Heera Mandi. This one is going to be a web-series. Gangubai Kathiawadi Teaser: Alia Bhatt Looks Impressive As the 'Godmother' of Kamathipura (Watch Video).

As per Bollywood Hungama, SLB had offered Alia Bhatt a role out of the 10-12 female protagonists in Heera Mandi and she has replied with a yes. "Since Heera Mandi is a web series, Alia’s character will have ample room to grow and breathe." mentions the portal. This is indeed exciting news if true. As after Bhansali's Gangubai, Bhatt will once again collaborate with the filmmaker. Alia Bhatt Is ‘Major Missing’ Beau Ranbir Kapoor As He Self Quarantines Himself After Testing Positive for COVID-19 (View Post).

“Each of the female protagonists will have a well-defined long-running role with room for the character’s growth. Alia is going to be one of them," a reliable source informed the portal. Earlier, reports were that Aishwarya Rai Bachchan, Madhuri Dixit, Deepika Padukone, Parineeti Chopra, Manisha Koirala, and Vidya Balan might also be part of the series. Gangubai Kathiawadi Teaser: Is the BGM Score for Alia Bhatt’s Sanjay Leela Bhansali Film Inspired by Marvel’s Black Widow?

Coming back to Alia's green signal for Heera Mandi, there has been no official confirmation about this either by the actress or by the director. For the unaware, Heera Mandi is supposed to be a story that brings to light the hidden culture of the red light area in Lahore. It focuses on the lives of the women who survive via doing sex job. Stay tuned!

(The above story first appeared on LatestLY on Mar 17, 2021 09:23 PM IST. For more news and updates on politics, world, sports, entertainment and lifestyle, log on to our website latestly.com).