Bollywood actress Rasika Agashe and wife of Mohammed Zeeshan Ayyub has slammed trolls for tagging the deleted Tanishq Ad as love jihad. Check it out. 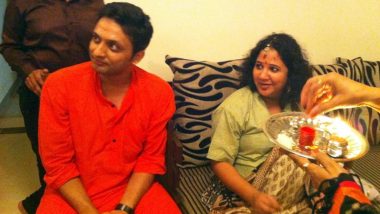 It's 2020 and we live in free India, but ask yourself are we really free? One of the latest examples of the same can be the Tanishq ad controversy which took social media by storm. The ad featured nothing but communal harmony and all it got tagged as was love jihad. After a lot of fuss on Twitter, the ad literally got removed by Tanishq. Well, now Bollywood actress Rasika Agashe who is happily married to Mohammad Zeeshan Ayub Khan took a sly dig at the Tanishq ad mayhem. And must say we loved her simple tweet over the chaos. Tanishq Issues Statement After Withdrawing Ad That Drew Severe Flak, Says 'Deeply Saddened by Inadvertent Stirring of Emotions'.

Agashe took to her Twitter and shared a picture from her baby shower and reminded netizens and haters about the special marriage act. "Meri godbharai.. socha share kar dun.. and before crying out love jihad, lets learn about special marriage act..," she captioned the picture. Well said Rasika!! The actress is popularly known for her role as Rabia in Mere Pyare Prime Minister. Tanishq Ad Row: 5 Beautiful Interfaith Ads Which Sailed Through the Pressures of Toxic Social Media Trolls And Didn't Face The Axe Like Tanishq.

Talking about the advertisement, it showed a Muslim family celebrating baby shower of their pregnant Hindu daughter-in-law in quite a grand and traditional Hindu way. This lovely message irked many online and the jewellery brand was slammed for promoting 'love jihad'. Following the backlash, the brand decided to delete the ad. Stay tuned!

(The above story first appeared on LatestLY on Oct 14, 2020 05:44 PM IST. For more news and updates on politics, world, sports, entertainment and lifestyle, log on to our website latestly.com).