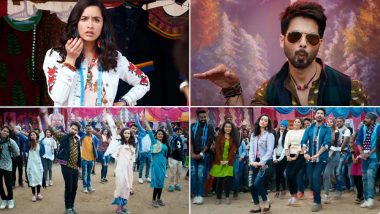 Shahid Kapoor and Shraddha Kapoor's new song "Gold Tamba" from Batti Gul Meter Chalu has hit the screens. Just as the song starts, you know that it is a typical Shahid Kapoor kind of track that we got to watch earlier. The beats are peppy and Nakash Aziz's voice grabs your attention. However, lyrics like 'when you getting gold, why go for Tamba' or 'when you getting Gabbar, why go for Samba' make us dig for better-written songs to soothe ourselves. The lyrics written by duo Siddharth-Garima could have been way better to fit this Anu Malik composed track.

Speaking of Shahid, he is as usual flaunting his dancing skills like a pro and his expressions on point. The track will somehow give you a feeling of Deja Vu because of 'Gandi Baat' or 'Mat Maari' from his film R Rajkumar. Shraddha Kapoor looks pretty in this track and matches well to Shahid's steps.

Speaking of the kind of cinema this BGMC is, the Padmaavat actor said in an interview, "I don't think this film isn't a mainstream film. I think it's an extremely mainstream film. I think issues don't make a film non-mainstream. It's the take on the issue, which makes a film non-mainstream. If this film had some serious title then this film's tonality would have been different and its reach would have been slightly limited. I always feel that if you want to say something good then it must reach a wider audience."

Batti Gul Meter Chalu is based on the plot of electricity theft in rural India and is directed by Shree Narayan Singh. The movie looks light-hearted which turns serious after a certain event. Yami Gautam and Shahid are seen having a face-off in the court over the electricity theft case. The film was shot in Uttarakhand's Tehri city. Tell us your thoughts on the song in the comments section below.

(The above story first appeared on LatestLY on Aug 17, 2018 12:10 PM IST. For more news and updates on politics, world, sports, entertainment and lifestyle, log on to our website latestly.com).