While the idea has been used multiple times in the past by superhero movies, a plot about doppelganger still has lots of potentials. Watching Hrithik Roshan's Krrish fight a supervillain, that looks exactly like him, might be wonderful. 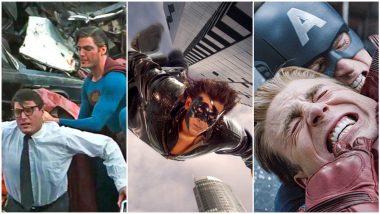 It has been quite some years since we saw Krrish on screen. Krrish 4 has been under development for quite some time now. As per the latest rumour, Hrithik Roshan's superhero avatar will be seen fighting his evil doppelganger in the upcoming sequel. It will be fun to see the actor in double roles. After all, a double role in his first film, Kaho Naa Pyaar Hai, is what made him a superstar. But, this won't be the first time a superhero would fight an evil doppelganger on the screen. The idea has been used in the past. Krrish 4: The Superhero franchise to see Hrithik Roshan Vs Hrithik Roshan in the next installation?

So today, we are going to list down five times our favourite superheroes fought a rogue or evil or past version of themselves. It is a CGI marvel that's fun to watch.

In this film, directed by Richard Lester, Superman meets a computer hacker, essayed by Richard Pryor who morphs into his evil doppelganger. A battle between the good and evil - who look the same - ensues in a junkyard.

Well, not exactly the evil vs good story. As both the Captain Americas were good here. Cap from the future travels back in time to get hold of two infinity stones, that a Cap in the past is protecting. Of course, the hero in the past doesn't know about the noble intentions of the hero from the future. A fight ensues between them, which thankfully, future wins.

Using, Logan's DNA, the evil corp creates aa stronger, much more violent version of the superhero. A climactic battle between these two Wolverines makes for one of the finest fights ever in superhero movies.

C'mon! Maybe it lasted a couple of seconds. But Deadpool going back in time to kill his evil doppelganger, has got to be the coolest and funniest thing ever.

It is about time, we start categorising Terminator as superhero movies, because the shiz that goes down gold standards. In an underappreciated sequel, Terminator: Genysis, which tries to reboot the franchise, an old version of Arnold Schwarzenegger's Terminator fights his younger version of the Terminator.

While the idea has been used multiple times in the past by superhero movies, a plot about doppelganger still has lots of potentials. Watching Hrithik Roshan's Krrish fight a supervillain, that looks exactly like him, might be wonderful.

(The above story first appeared on LatestLY on Dec 31, 2020 05:40 PM IST. For more news and updates on politics, world, sports, entertainment and lifestyle, log on to our website latestly.com).